Nay! It's Ney on a neigh-neigh.

2015 is not only the 100th anniversary of the ANZAC campaign in World War One, it is also the 200th anniversary of the great battle of Waterloo. I and my fellow Regimentals are all based in Wellington, New Zealand and as such, we have a special connection to the battle and Lord Wellington, Sir Arthur Wellesley. Some of the local Wellington based Napoleonic wargamers have organised a massive 28m refight of the battle and Lintman, Prinny and I are lucky enough to be involved in the game.

The game is going to be huge. They are planning on using the Blackpowder rules and have based the units at battalion level (4-6 bases with 20-36 figures each). This game wont be as big as the previous large refight of Liepzig that we did back in 2013 (Youtube has the evidence here with part one and part two) but will still look awesome. The place we are holding the game is significant as well - its the '1815 Room' in the Wellesley Club, just off Waterloo Quay, here in Wellington. Nice!

At the Liepzig game I had the fortune to play France's greatest general of the time (well, the Bravest anyway!), Marshal Michel Ney. I enjoyed being the commander of the Northern Flank so much that when asked if I would play in the upcoming Waterloo game, I accepted with two caveats, 1) I would be Ney again and 2) I would not need to paint any figures.

Caveat one was successfully negotiated. Caveat two, well, rules are made to be broken. Organiser Paul Goldstone contacted me a while back to say that there was no Ney figure for my command available and was I ok with using a generic general base. Nay! I said. Not with the lovely Ney command pack from Perry Miniatures available. A quick order later and a week of painting and left me with this excellent model:

The three riders are beautiful models and so are their mounts. More piccies below. 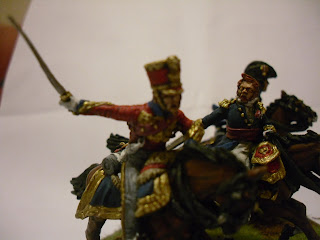 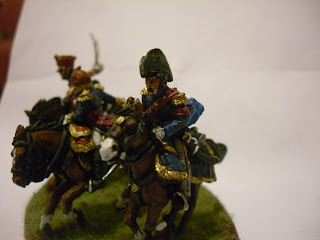 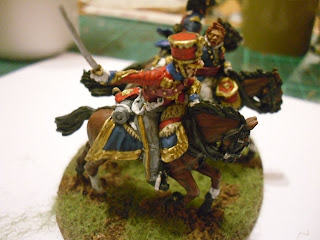 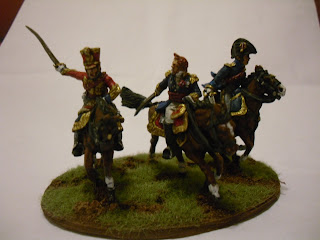 Damn I wish my photography was better!

Along with Ney and his ADC's, I have also been painting a character figure for our Regimental RPG night. We are playing IKRPG, the RPG version of Warmachine. This campaign, run by Prinny, I shall be a Khadoran Paladin/Investigator. Think Indiana Jones meets a Space Marine Librarian.

Next up, even MORE 15mm Napoleonic Austrians are on the bench. White uniforms = the Devil's arse.
Posted by McBeth at 23:13