Last week neither Pelarel nor I could make it out to the club, so we decided to play a game of Infinity in Pelarel's basement instead!

We played a 252 point game (because that was all I had) of my Haqqislam against Pelarel's Yu Jing. It was my first game of Infinity V2 and Pelarel had not played many recently so alot of time was spent reading rules. To help, I had McBeth Junior no.2 rolling my dice. As it turned out, his ability to roll exactly what was needed (and therefore scoring a critical hit), turned the game completely in our favour.

The highlights of the game were;


In the end, the mighty forces of freedom loving, enlighten Haqqislam triumphed over the evil corporations of Yu Jing.

When Nick passed last year, our friend Nichole was keen to get a memento from Nicks collection. One of the things she would laugh about was that the Napoleonic wars had units of Hussars, or Hussys, as she called them. Unfortunately all the Hussars Nick had painted were put into a job lot of his Napoleonic French so there were none left over for Nichole.

As I was going through some of Nicks left over stuff in my basement, I found a sprue of the Perry French Hussars and a thought occurred to me - why dont I paint them up and mount them for a display for Nichole. It took me a while to complete the work, but I was really happy to present Nichole with the finished product earlier this week. I hope she enjoys it.

I have been busy painting but again, nothing has been ready to post. Now I've managed to finish painting my Bolt Action Scots, I have started to base them.

More to come as I finish the basing. Next up: Carthaginians for Impetus!
Posted by McBeth at 18:32 No comments:

Team Yankee has been one of the games which has fallen by the wayside as late, as Impetus or Bolt Action took the lead.
Instead of playing in the Bolt Action club day, McZ and Tank wanted to get back to the awesomeness that is 6mm Team Yankee. And when Tank was unable to make it, I didn't want to leave McZ without an opponent, so I gladly grabbed my big box o' freedom (my US forces) and we set about relearning the TY rules!
Game One: Hasty Attack, with the Russians as the aggressor.

Being a Hasty Attack, my US forces would only start half on table. Opting to put the M109s and VADs, as well as my poxy little ITOWs on table, with my Abrams to come on from reserve.﻿

The first few turns were relatively quiet, the soviets advanced en-mass, and the M109's began raining down laser guided 155mm rounds onto the soviets.
Copperheads are fun. Even when you can't roll a 2+ firepower!﻿
The Hinds arrived to strafe the artillery, only to find the VADS get so many dice (28 in fact!)- they both promptly dissolved under the weight of 20mm cannon shells.

The Soviet infantry continued to advance on the flank, finally dismounting out of their transports to assault the poor widdle ITOWs

But on the right flank, the 9 Abrams were duking it out with two companies of T-72 tanks.

The Abrams eventually cut through the T-72s, breaking the Soviets. So the net result was a US win, for the loss of the ITOW platoon, and an Abrams platoon.

McZ rightly pointed out that our next game should just be the same scenario, with his force totally replenished, and mine with the permanent losses....

Game Two: No Retreat, with Russians as the aggressor

So, we learned a lot from Game One. Copperheads are cool, and don't fly hinds into VADS. McZ's Russians would not fall so easily in the next game....

Looking at the lists in the book, we noted that the tanks were awesomely cool, but we weren't sure about the infantry. Naturally, we decided to test that out, with the Soviet tanks attacking an M113 company!

McZ had a mostly unchanged list, except dropping the infantry in favour of more AA, an airlanding troop and swapping a full battery of Hail launchers instead of the 2S-1s.

After figuring our way through a few deployment questions (what counts as a platoon and how to deploy stuff), it was game time!

The Soviets advanced, threatening everything everywhere, with Hinds destroying one of the picket ITOWs.

The ITOWs were causing McZ no end of annoyance as their gone to ground and concealed nature made them damn hard to hit- so much so that McZ resorted to rushing them with T-72s to get within the minimum range of the TOW missile!﻿


The ITOW launchers were all destroyed, but managed to tie up the Soviets long enough to let the A-10s (AT 27 Mavericks? Yes please), Cobras, M109s and Abrams clean up the Soviet units.
Highlight for me was getting a sneaky flank kill on a T-72 with a Dragon from my infantry, and my last Cobra sitting above the Hail battery chewing through them with it's nose cannon.
But again, many, many lessons learned. Things like... preplanning artillery targets is in the rules, as is not having to spot specific teams (poor ITOWs won't last as long next time!). We also need to get a handle on how smoke works, because I think that will be a game changer for how we make the attack!
Overall
Team Yankee is a fun game. It plays in places a little like FOW lite, and for me that is not a bad thing at all. I like it for 6mm, I think the scale would annoy me for 15mm, but in 6mm it feels "right".

There are definite challenges for the attacker, especially in keeping your AA bubble up with your forces. The range on the TOW and Maverick missiles was such that I was always firing from extreme range, a long way away from McZ's AA assets. That said, it kept me from attacking what I really wanted to, instead leaving me to snipe things from afar.
The game does need new lists (especially for the Russians!), but we know they are on the way (Germans shortly, followed by British and hopefully more Russians- please BF!).
We are already planning the next game, it is time for the US to be doing the attacking, lets see how that goes!
Pooch
﻿

Ok, so this is super late, and I am not even going to try and make up an excuse.

Instead, I will distract you with pretty pictures, like...

These ones of additions to my Bolt Action German army!


So some cool wee additions to my Germans, adding in a few elements to let me do a more early war army, as well as some great late war elements! I think my Germans are more or less done at present, there is nothing I have a burning desire to add (I am sure someone will remind me that I don't have x and I just have to rush out and buy it...)

Sticking with Bolt Action, I have finished the fourth BA army for this year- US Rifles!

So there it is, BA army number four! Overall, I am really happy with them. I am on the look out for some crew for the M10/Greyhound/Scott, but other than that, I think the army is more or less complete!

Lastly, this month I completed some Warlord Games Special Forces troops for their Project Z game. I decided to build them as a unit of the "Not Russian" Green Men from the Ukraine. Overall, I wasn't that impressed with the kit, but am happy to have them done (you can read more of what I thought here if you are curious).

So that was 7 of the 8 figures, so the final figure I converted to being my take on the Punisher, from the latest run of comics. Who better to do your zombie killing than him? 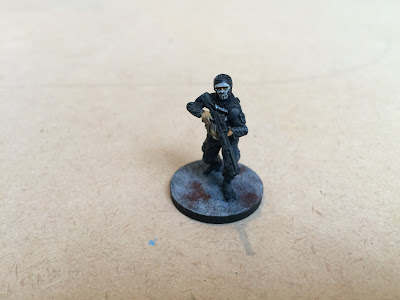 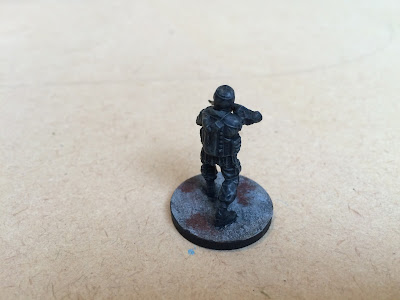 Anyway, that is it for this month, see you for the half yearly round up in a few weeks!