I'm not sure where May, or even June got to. So this post is ridiculously late, and I'll do my best to return to the 'old ways' of doing a post as close as I can to the end of the month.

But, in May I finished up my Goblin Kings of War army, so figured that I would at least share the pictures of that with you!

1. Paint a Kings of War Army- FINISHED
This goblin army was made up of miniatures almost solely provided by Games Workshop, and put onto bases made using a Greenstuff world roller and Miliput, and differing rocks and other things to make it feel like a ruined dwarf hold. I am really, really happy with how it has all come together in terms of the colours and the basing- between the Krieg and these I am really proving to myself how good I can make my least favourite part of the hobby (basing) look when I put in actual effort!

Finishing up the goblins was my real lockdown project win, I really am not sure how I would have got it done if I wasn't in that "well, I have nothing else to do" mode!

Even better from my perspective is that I have now played a couple of games with it, and have really enjoyed it! I think KoW is absolutely going to be in our regular game rotation from now on.

Anyway, onto the army!

Email ThisBlogThis!Share to TwitterShare to FacebookShare to Pinterest
Labels: Kings of War, Pooch 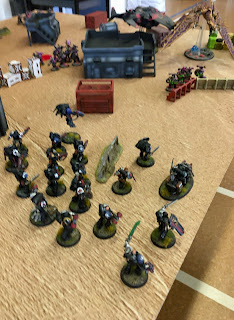 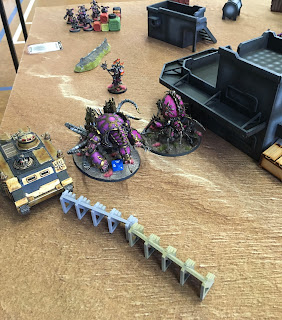 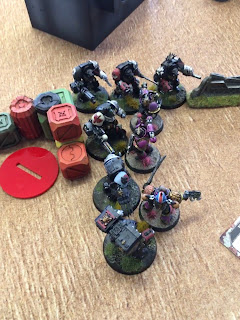 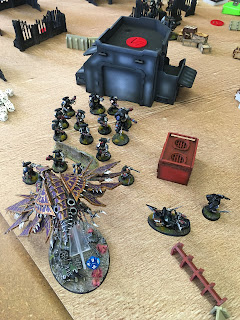 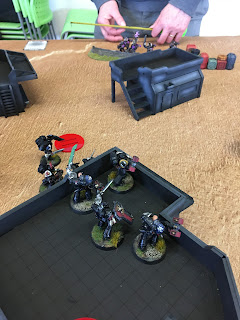 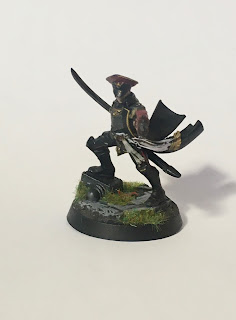 It's a great model and she looks awesome in the battleline!
Next Time
Dunno. Having some time off work this week so might get some serious painting done. I've got a Strike Squad of Grey Knights to assemble and paint which I'm kind of looking forward to. We've been talking about some 500 point 40K later in the year and that'd be a great excuse to paint the GKs.
Posted by McZermof at 16:28 No comments:

So. Adeptus Titanicus models. Wow. GW have managed to scale down the amazing quality of the 28mm versions of these knights into an 8mm (?) scale kit that looks as good as the full scale one.

I've painted up these two Cerastus Lancers in the colours of House Hyboreas, close allies of the Titans of Legio Vulpa. As far as the fluff goes, most of the Knight Households are dedicated to Chaos Undivided so I went up the ranks and looked to the Titan Legions. Legio Vulpa fell to Khorne so these seemed like a good choice. 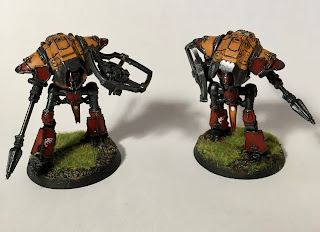 I really want to paint up the shields with some glowy OSL to highlight the ion shield, but I'm currently lacking in confidence and experience on that score so will practice on some other stuff and then have a crack. I've also had to get our local GW dealer to see if he can dig me up some of the transfers for these dudes. I popped a couple on to see how they looked and I'm super happy but would love some more detail.

Workbench
Some 15mm Grenadiers have arrived from the UK! I had a dig around in the bits box and prepared six Panzerschreck teams for my LW Winter Germans. 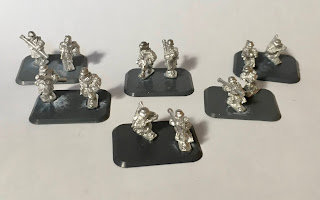 I've got three bases of actual infantry from the first squad to finish (from the original 653 SPzJg days!) which need to have some Panzerfausts mixed in and then I'll get to painting all of these.

Next Time
It's club day again in a week and I'm looking forward to some more nerdery. Not sure what I'll be playing at this point but some in-game photos and hopefully a bit of painting too!
Posted by McZermof at 18:38 No comments:

Wow. It's hard to believe the last time we were at a club day it was February!

But we're back! And it was awesome. We played some Mid War Flames of War to enjoy our first game day in more than three months!

In the first game, I took on Pelarel's MW British Rifles in a Counterattack. 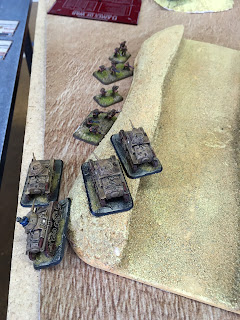 Turn 2-ish. I deployed my 90mms WAY too far forward and they were promptly sacked by a rifle platoon. I ambushed my L6s to send them packing. The L6s promptly learned what a mess 40mm Bofors AA guns make of L6 Light Tanks.

Over the middle turns, Pel got his Rifle platoons in place between my reserves and the objective and his Daimlers made a huge mess of my Assault Engineers. Even the timely arrival of my Elefantinos couldn't see them off. Embarrassingly. 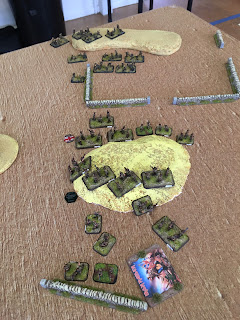 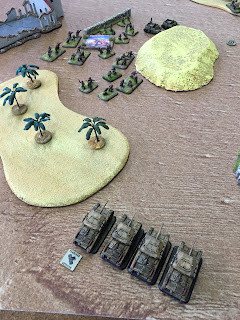 Sneaky Semoventes attack after the British infantry withdraw onto the objective. I dropped a couple of lucky 25pdr bombardments onto the Rifle platoons and made quite a lot of mess. This was the point that Pel REALLY needed his aircraft to arrive and they just persistently failed to do so. 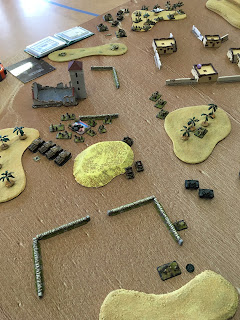 This pic is basically just before the game ended. The Daimlers took some cheeky shots at the Semoventes and didn't get the king hits they needed and the 6pdrs were in the perfect position and promptly ran away after taking fire from the 25pdrs and three L6s that had survived the Bofors. Eventually the Semoventes pushed their way through the infantry onto the objective. It was one of those games that looks worse than it was. One airstrike and I was in all sorts of trouble. Losing half my Assault Engineers before they managed to assault anything meant I had to rely on the Semoventes and they were really vulnerable with 6 6pdrs and the Hurricanes zipping around the place.

I played a second game against McBeth Junior Senior running US Tanks. He contacted a dug in Italian infantry position. 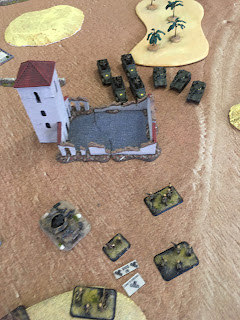 Shortly after I took this, the US infantry debussed into the ruined church and promptly spent the rest of the game sitting there under repeat 25pdr bombardment and refusing to rally, even on 3+! 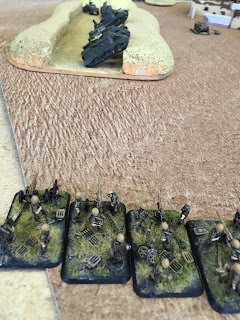 This was a fairly cheeky attempt by my reserve 47mm guns to gank a troop of Lees. AT 6, even against side armour, wasn't great. The Recce Platoon you can see at the far end of the gully zipped up and made VERY short work of the Elefantinos!

The Lees pushed into the Weapons platoon on the objective on this flank and, having blasted the AT guns out of the platoon, promptly didn't have a great time in combat trying to shove them off. Even a cheeky assault by the Recce Platoon couldn't quite get there. McBeth Junior Senior played well, although attacking into dug in Italian Weapons platoons and ambushing 90mms was not an easy ask and those infantry refusing to move was a real pain.

I've been building too, preparing for the impending drop of 40K 9th Edition and getting some of the groundwork for my Nighthaunt project. 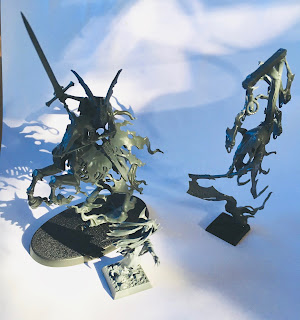 New Nighthaunt solos! They're amazing models. The Knight of Shrouds will be a Dreadfiend, the Banshee is a Banshee (!) and the Executioner will be a Shade or a Horror, whichever works. It's such a cool model! 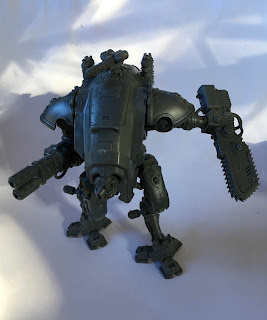 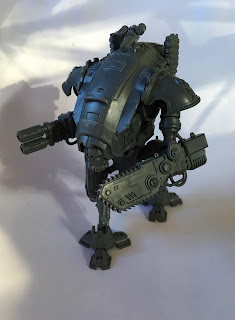 I've also built my two Armiger Warglaives. I LOVED putting these together and I can't wait to paint them. House Tirryns, here we come.

Next Time
Painted models! I've put the base coat on my Epic Knights and they'll slowly get done this week. I've got some more Grimghast Reapers to build and a box of Grey Knights to make a Strike Squad out of. This is all part of my vain hope that 9e 40K Soup armies are definitely going to be a thing.
Posted by McZermof at 19:16 No comments: 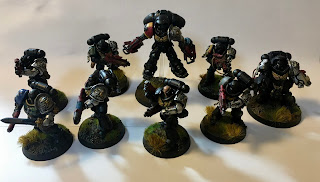 I doubt they'll see the table before 9e drops, but you never know. Regardless, I love having a unit with high calibre weapons to commit shenanigans with DW Special Ammo and being able to use the Space Marine rules now too. For the moment, this signals the completion of my Deathwatch army. For the moment. The new Primaris Marines that have been previewed are amazing and apparently they'll be allowed for DW, unlike the Phobos Marines and Eliminators.

Workbench
Been hitting the assembly pretty hard at the mo as well. I've put together these PSC Mark IVs for my revamped Late War Grenadier army (when the Greatcoat infantry finally find their way here from the UK!)

I've also started the first assembly for my new Kings of War army (yeah, I know....) 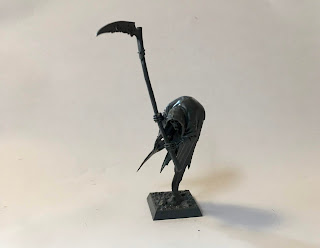 I've always really loved the GW Nighthaunt range and when I said to Pooch "But McBeth and Pel already have Undeads, so I'll skip it" and he pointed out the KoW Nightstalkers list. I looked at the list and the range and made a few starter purchases. I should have enough kit for a 750 point army reasonably smartly. I'm looking forward to painting them and also playing something that's a complete change in tactics from the Order of the Green Lady.

Next Time
I'm going to paint up my Cerastus Knight Lancers for June's contribution to the Stupid. I suspect they'll take some time. The detail is gorgeous and I really want to make them look good. Got a bunch more assembly to do too, so will be working on that.
Posted by McZermof at 15:59 No comments: