So first off I think it's worth sharing the top three for this TY event because the Regimenteers have done well indeed!

3. Blogger Tank (and only because I beat him in round one!)

I didn't get enough photos, again, and a lot of the ones I did were not great. Sometimes I wish I could take a screen to block out the world around the tables and actually make the models-eye-view pics have a background.

I also picked up some new buildings for my 15mm table, some SdKfz 251/Ds for my Normandy StuG Kompanie and a sweet new Inquisitor with a wee dragon.

Something profoundly dull, like some painted models. I've got lots of half finished things on the deck at the mo so I'm going to try and get some of that done this week.

Posted by McZermof at 22:41 No comments:

Another month of the year gone, and to be honest, I am not sure quite where it went!
I made progress on a bunch of things, but finished very little. Hopefully next month will be different!

2. Create a table of terrain to support a game- In progress!
No further progress on this for July, I've still got a bunch of sprues that I need to build and paint.
3. Complete the 6mm Apocalypse Challenge- In progress!
This one I did do!
Two new Superheavies to round out a Superheavy detachment. The Shadowsword was built as is, and for the Stormblade I used a spare Plasma Blastgun from one of the Warhound Titans. It's ridiculously oversized, but still awesome.
As well as that, I finished up another three Knights. I converted one to be a Knight Baron (for those who can remember them), with a Lance and a Battlecannon.

4. Run a narrative campaign for the group
Club days are a bit scarce at present, so i'd expect this will run in the last few months of the year.

5. Add a new detachment to one of my 40k armies- DONE (but ongoing)

Some progress made here, but it's still a secret for now.

McB has been looking closely at a different ruleset, but time hasn't been very plentiful to look at it. Soon!

9. Paint a stand alone force- DONE
10. Update and improve a table of terrain- DONE
11. Paint a Flames of War Army (In progress)

No progress on these in July, I'm painting something for August right now, and have lined up a tournament to take them to!

12. Finish what I should have finished last year- DONE

And that's it, on to August!

I'm playing in a Team Yankee event in a week so this weekend's hobby time was mostly about prepping for that.
First off, I did the 20 trees I picked up from our local hobby shop in March specifically for this event to bulk out the forests on my 15mm table. I just wanted them to look more dense and I didn't have enough trees. So starting off with the exciting photo: 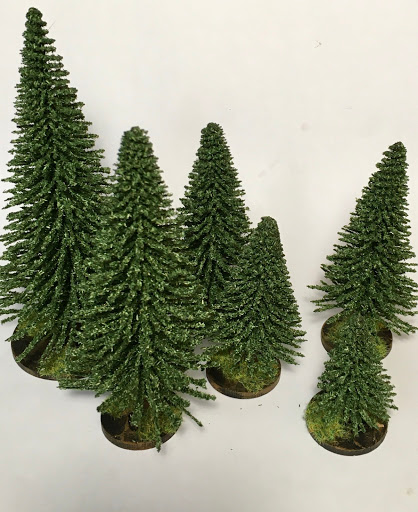 There are another dozen or so just like them. Thrilling stuff. Once those were done, I decided it was time to finish up some objectives for my TY army: 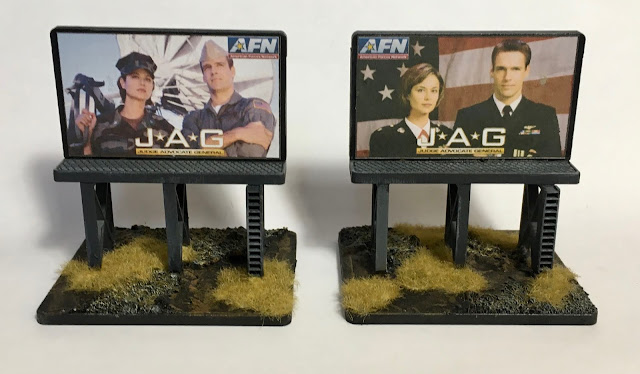 I know the dates are wrong for the series - it didn't start till the 90s but I don't care. As someone who can run Army and / or Marines, I decided that Harm and Mac were where it was at. Thanks to blogger Scotty for the spare billboard objectives (originally from Oli at Battlekiwi) to make these up.
Finally, much to my surprise, the new unit of AA that I ordered from Battlefront arrived in double-quick time (admittedly, less it's unit stat card) and so the list got rejigged to fit in these glorious LAV-ADs:

Arguably the coolest air defence platform for the US in TY, it's pricey at 8 points but offers up more mobility and multi-role utility compared to Humvee-mounted Stingers. I'd be curious about paying out 2 points more to have VADs and Humvee Stingers to see if there's value in having the two platoons, but I do like the fact that if an opportunity for ground attack comes, the GAU-12 on the LAV-ADs could be quite effective.
The kit is nice - a resin top and turret on the existing plastic LAV hull and wheels. Not a perfect fit by any stretch but nothing a careful bit of sanding and putty didn't fix. Also, being a brand new kit the cast is crisp with only one bit of flash to cut off and lots of nice detail. Pretty happy with how they came out too.
Next Time
TY event wrap up and as many photos of the cool stuff that's there as I can manage. I don't expect to do all that well but that's never been the point. We've also tentatively booked in some 500 point 40K to finally sucker in introduce Richard (from his Musings) and the rest of us to 9e 40K so I'm aiming to hammer out my Grey Knights into a 500 point form that I can try out. Only 11 models to paint. All silver. Fine.....
Posted by McZermof at 20:20 No comments: