It's been a tough week of not getting a lot of painting time but I have managed to get the Cawdor 99% done with a little experimental detailing left to do.

Like I said last week, the whole gang is mixed blue and linen and aiming to look a bit dirty. So just a few pics rather than a long and rambly description.

I'm missing a second champion to play against Tank and Pooch's boxed gangs, but GW have (vexiungly?) just dropped a magnificent Cawdor bounty hunter from Forge World who will make an excellent champion too, so he's gone on the shopping list. And if I'm going to Forge World, I'll have to pick up a weapons kit and another sprue of dudes to make up some other variants...

On the experimentation front,  I picked up some Typhus Corrosion and Ryza Rust from GW yesterday and I'm doing a few experiments on how these two paints work together to give a rust effect. I want all the blades and spikey bits to look really rusty and tetanus-y. Seems like it'd fit well with the fluff. 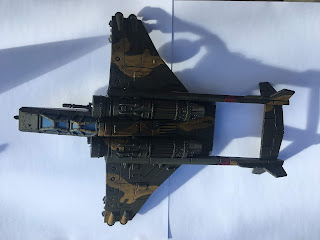 I'm stiff fighting with the door gunners. It's very hard to get them to sit right when you can't take the hull apart. That's often the way with auction purchases. Mercifully the wings still come off so it's not impossible, just stupid hard. But I've got the tiger stripe on, repainted the whole thing in the right shade of green and have mapped out a bit of a transfer plan to make it look super cool.

Next time
The Valkyrie will definitely be done and as blogger Scotty is working out a 1000 point narrative campaign to run through August, September and October, I have a few things I'll need to buy and get built and painted for that. On the plus side, doing that will just about get the Guard company finished too.

Posted by McZermof at 17:04 No comments:

Tank and I had a couple of games at the club yesterday to test some TY and play our first game ever of Necromunda2.

Team Yankee
Fellow Regimenteers Pel and Scotty suggested testing out TY on an 8x4 at 90 points as a test for ValleyCon 2020. Pel particularly wanted to find out if the extra 2 lineal feet impacted the game and Tank wanted to give his work-in-progress Israelis out for a run.

Scotty and Pel played a corner-corner mission and Tank and I had a run through a long table-edge mission (Contact). I'm not going to run through a full blown battle report as we made a bunch of mistakes and derped around a lot so this was more about trying some stuff out so I'll throw up some nice piccies and jot down some post-game thoughts.

I took basically ALL my Marines (less some LAV-Ms and a HMMWV Scout Patrol) and Tank bought Magachs, Merkava 2s, Israeli infantry and Skyhawks!!


In the end, the game was lost by Tank rolling reserves and then having them scatter onto the wrong flank two turns in a row. It was a bit of a disappointment as, had either of his infantry platoons arrived on 3 - 6 (instead of 1-2) then I'd have had a VERY scary platoon standing on the objective facing down four LAVs and 3 M60A1s.

So what did we learn? That being able to ram a dozen LAVs across the board in turn one and force the defender in Contact back towards the centre of the board and away from the objectives was good. The extra linear feet gave out some flanks for me to hoon around on but also meant that either of us could have rammed through gaps in the line as neither of us could really cover board-edge to board edge. It also made the flanks vulnerable to aircraft as most AA screens won't cover all of that - short of playing WARPAC with Geckos and Gophers.

Tank has been trying to work out how to get a good list out of the Israeli army and the conclusion at the end of this game we had a good chat, especially looking at what Pel was running with his Chiefs on the table next door, and there is definitely a list pushing Merkava 2s as a mainline tank and finding some of the silliness, like ITOW Jeeps and Perehs to make up for the AT19 on the Merkava.

We'll also all be at Panzerschreck in Palmy in a few weeks and so will be playing 140 points on an 8x4. While I think our crew reckon these games might be a touch too large but 90 on an 8x4 didn't feel too bad, much to my surprise.

Necromunda
So we had a bit of a technical fail, in that Tank left some of the key documents in the library at Casa del Tank but Battlescribe filled a few of the gaps for us and my hazy recollections of Necromunda 1 did a solid stand in (and, amazingly, were close to right!!). The game was really cinematic and some of the actions were super fun.

The game was a lot of fun. GW have rolled in the best of Necromunda1 with some of the cleverness and slick rules of 40K 8th ed. Pretty pleased so far with how it went and we'll need to play some more - it'll be much more interesting once we get into some scenarios too.

We did learn that the Overseer Leadership skill is probably a bit broken once we worked out how it was supposed to work and that Blaze is the funniest rule in the game. I am going to have to get a weapon kit from Forgeworld (ignoring the screams from my wallet) and probably the bomb rats too since they're really badly funny.

Next time
The Cawdor are going to get finished and, if I can figure out how on earth to mount a couple of heavy bolter gunners, an Imperial Guard Valkyrie! Pooch and I picked up a pair on a local auction site and mine *really* needed it's door gunners. I've managed to get the bits but getting them reattached to an already assembled model might be a real challenge.
Posted by McZermof at 17:03 No comments:

Guardsmen and not Guardsmen 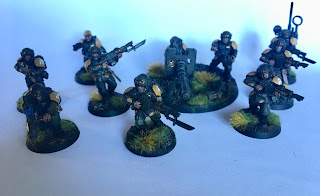 Now I just need to finish the support squad and my platoon of Guardsmen will be complete. I'm starting to wonder if I need a fourth squad of dudes for the company and, given that they clock in at a shade under 100 points, it's not like it'll be hard to fit in. The question is whether or not I want to paint another squad.

I've started working on the Cawdor too: 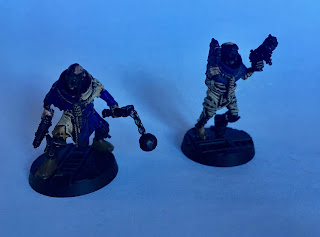 The studio scheme is black and blue and it was a bit dark for my liking. The Cawdor are supposed to be trash pickers and scavengers and black / dark brown seemed to be a colour that would hide the dirt  so I went with a dirty linen colour to go with the dark blue instead.

I think I might also have to look at a lightbox. If I'm not taking the photos first thing in the morning, when there's loads of sun, I'm finding it hard to get a well lit picture.

Next time
The rest of the Cawdor and some photos of our first game of the new Necromunda as Tank and I give it a crack. We're also testing out a larger scale game of TY on an 8x6 table. Should be interesting.
Posted by McZermof at 19:09 No comments:

So the cold and the jetlag has really put a dent in my productuvity this week and I think after the insane amount of stuff I did before I went away, it's going to take a while to get back in the swing of having things done for Sunday blog posts. But I have done some work this week.

Cadians
I got the base coats on the last infantry squad and while I was hoping to get them done today, the ability to concentrate for long periods hasn't really been there (thanks jetlag. Ugh.) 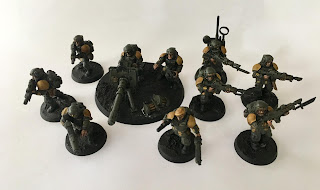 But rapid fire squad is coming along nicely. In the meantime, I also got the support squad assembled and based ready for priming. 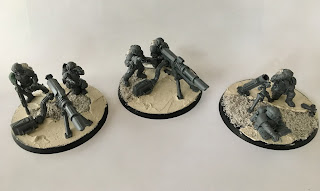 I rather like the idea that I'm deploying a platoon with sensible platoon level support. Not 9 mortars. One of these lascannons probably should be something else, but they just look so cool!

Fellow blogger Scotty is planning a narrative campaign (at 1000 points!) so I'd super keen to drop my Guard into that, led by one of my fearless Inquisitors. Who, you ask? The current plan is Greyfax because the model is awesome and I haven't put her on the table yet. And Karamazov seems like that would be stupid.

Not Cadians
Because Cadians seem to have been a bit of a staple for me for a while (but so close to being done with the infantry!) I thought I'd get the Cawdor gangers built. The models are delightful, albeit not as poseable as I'd hoped, but definitely provide a better mix of options than the old metal range. I have close combat weapons! 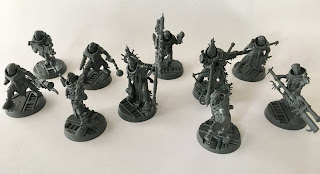 Pooch, of course, reminded me that Forge World have also made some alternative weapon loadouts. And they look amazing. And I'll probably have to get them too. *Have To*. You understand.

Next time
The finished Cadians, obviously, and probably a couple of test Cawdor models. Although, looking at the pile. maybe even my tidied up Khemrian skeletons for playing Kings of War Vanguard might make the cut. If I can remember how I painted them to add in the last couple of models!
Posted by McZermof at 19:35 No comments:

That all of my last four posts looked alarmingly familiar?

I went on holiday and craftily pre-published my weekly blog posts to make sure I kept up my self imposed requirement to blog weekly. :) So I painted a bunch of stuff over the month before I went away in amongst all my other projects!

So I went to Japan (amaze, BTW) and had high hopes for things I might be able to pick up based on a previous trip a few years ago. I wanted to get some scale model aircraft, in particular, to support some Team Yankee plans. I didn't have a lot of joy with the scale models unfortunately - since Gundams, while awesome and to scale, don't really slot into TY armies.

I did find a few little gems about the place though.

1. Some 1/100ish modern machinery from Tomica that will get repainted for my TY board. 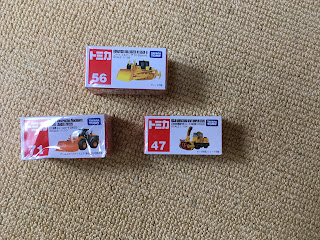 2. Tank made me sad when he posted that he had no one to play Necromunda with, so I bought the Cawdor gang box. It looks like it'll be fun to put together and play. (Great excuse right?!) 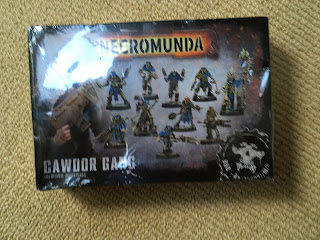 3. And then there was the 'well, if I can't have some planes, then Imma buy a flying battleship': 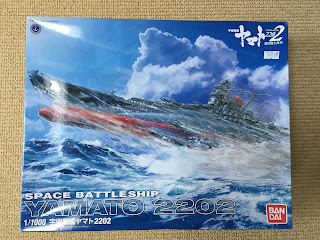 I saw the Space Battleship Yamato film at a film festival here a few years ago and it was awesome. So this popped into my head as a backup possible souvenir. I can't wait to put this together....
Posted by McZermof at 19:20 No comments: