Wasn't it just April? And now May has come and gone?

Well, at least I painted some stuff....

1. Paint a new 40k Army
Another month, another batch of Krieg. This time, we have 18 more infantry, including some more plasma guns and sergeants. In case you are counting, that leaves 10 to go, plus 5 weapon teams to make 5 full squads (which will be my full allotment).

We are slowly heading towards a legal (but awful) army of Imperial Guard!


But not only that, I also managed to finish up a Sentinel:


2. Create a table of terrain to support a new game
Did this one back in March!

3. Make a modular terrain piece
No progress. No plans. Probably should think about it....

4. Paint a Naval Fleet
Did this one in March too!

5. Finish something for an army I haven't used in a year and take it to a tournament
This one is going to be July.....

6. Buy a starter box and paint all of it
Did this one back in February, although I have been thinking about other starter boxes.....

7. Paint every miniature for a game I own
Did this one too, back in February.

8. Paint a Space Marine Hero each month
On track! Another bolter-boy done, which brings us up to five. That's all of the bolter marines done, although I have had thoughts about doing some conversions on a couple to make it so that I have a full tactical squad....

9. Paint a standalone force
And another one done here too. This time, it is the Gellerpox Kill Team from the Rogue Trader box. You will have seen over the past few weeks that McZ has been painting up a storm getting Elucida and friends ready. Well, it only seemed right that I made sure ol' Vulgrar was ready too!

In terms of colours, I deliberately went with blues and purples, which keeps them in a similar colour space to my Death Guard army, but also makes them distinct, which I like. All in all, I am really happy with how they have turned out, and will be extra pleased to get them onto the table to play through the official scenarios!


10. Update and improve a table of terrain
No progress here, should have it done for a tournament in July....

11. Paint something Napoleonic
Still need to do that Perry order. Maybe next month?

12. Finish what I should have finished last year
As I said last time, there is only one of these things left. And I haven't even thought about getting it done. I really should tho....

So, in terms of goals, there are only three that I haven't made any sort of start on, two which are ongoing and the rest are completed. That is not a bad haul for only 5 months into the year!

I'm also going to introduce another section to this blog. One of the other Regimenters passed this to me on Wednesday. And in an effort to force me to do my best painting on it/to not get frustrated with it/to make sure I actually get it done/etc I am going to add it to this blog. So, from this blog forward we have MORTY-WATCH! 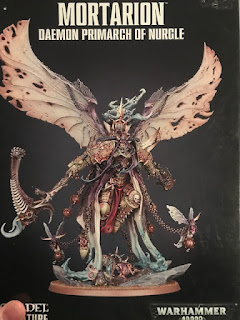 Next month.... Will he get better at photography? Will he paint more Krieg? Is he competent enough to actually paint something in sub-assemblies? For these questions and more, tune in next month....