Bit of a light blog this week. Rather than get a bunch of the things finished that I was thinking about doing, some things arrived in the post so I built those instead...

These are for an event later in the year where I'll be running my FallschirmStuGs with some Panzergrenadier support and Puma recce. I fear that this might be the start of the Puma company I've often thought about but never *actually* done. Both sets are lovely kits. I've done the 251/Ds without gluing the tops on since that'll make it easier to paint the interior and the passengers before gluing it up to paint the exterior. The Pumas are amazing and the kit comes with enough parts to make the 2cm turrets and the 234 with the short AND long 75mm. The only gripe (and this applies to both) is that MG34 on a mount is SO fragile.

I have moved a couple of projects along as well. I've sorted out a consistent orange for the carapaces of my House Hyboras knights for 6mm Apocalypse so these guys got their red base coats and orange top coats done this week:

I'm really looking forward to getting them on the park with my Cerastus Lancers. I'm also REALLY tempted by a box of the new Cerastus Castigators and Acherons just because the idea of knights with close combat weapons really fits into my 6mm vibe SO MUCH!

I've also instituted my backup plan for club weekend next weekend. I just don't have the mojo for some Grey Knights right now so I'm painting up the new Inquisitor and will have her lead a couple of Deathwatch Kill Teams into combat for the day. This may or may not go well. But here is Kyria Draxos, largely block painted: 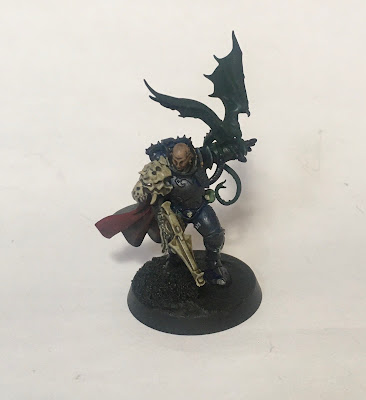 I need to do a lot of work on the armour as I'm really not happy with how well the primer and base coat covered it - I use a blue ink over my black armour. Partly it shades it a touch but also it shows up where my base coat isn't clean enough.

Well, a finished Kyria Draxos and maybe some impressions of a few small scale games of 9e. I'm also planning to power through those Pumas and 251s as well. The event isn't till October but it always pays to be ready in advance!