Every year at this time we all get in our cars and travel to Palmerston North for a boys weekend. There is lots of bad food, bad jokes and good scotch. Oh, and a Flames of War tournament.

Panzershreck is run by the Manawatu Duellists Society and is the worlds oldest and longest running Flames of War competition. I think I have been to every one of them bar one since coming fourth in the very first competition. Battlefront's main sculptor, Evan Allen is a stalwart of the club and its always a good excuse to head over to Palmy and catch up with him.

In recent years, Panzershreck has become a doubles competiton varying points between 800 and 1100 point per player and either Late War or Mid War. This year its 1000 point a player Late War and each of us here are teamed up with another; Me and Pelarel, Lintman & Prinny and McZermof & Tank Engine. Scotty will be the subs bench for the teams, so we can tag out and get a pie/beer/toilet break with out having anyone miss the action. Scotty may well be drinking all weekend (fair warning).

As we all are playtesters for Battlefront, you would think we'd do well at this tournament wouldn't you. Well, apart from Prinny and Lintman winning one year, we've all been rather bad at Panzershreck. That's not the point of the trip though - Korean BBQ and more scotch than is good for you are the main draw cards. 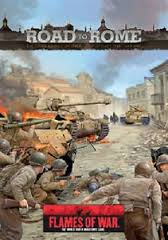 Pelarel and I are taking our lists from Road to Rome, the campaign book with lists for the Allied armies in Italy, 1944-45. I'm running Kiwi Rifles and Chris has a British Rifle company and our one and only test game is here. Both of us are comfortable being infantry commanders and are good enough not to make out turns drag out with lots of bases to move.


Nothing too silly but then again, nothing to scary either. I suspect there will be a lot of tank armies out there so out PIATs will get a lot of work. And our 17pdrs, 105mm artillery, M10s, Shermans and 6! (yes, six) 6pdrs. I think we'll have an award for the most amount of tanks killed by a PIAT by our platoons :)

I'll leave the other teams to post their crazy armies.

Wish us luck (we will need it).