OK, I did say we were a group of Magpies but even I'm a little surprised as to how many projects I've started in the last couple of weeks!

First up, I'm going to show you the only thing That I've actually started AND finished in the same period: 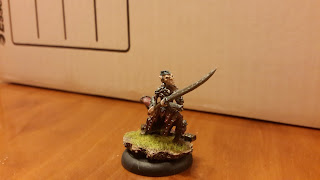 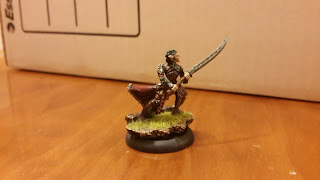 loyal followers, meet Nevyn the Nyss my character in our current RPG group. The group of us Regimenteers on the blog play the Iron Kingdoms RPG from Privateer Press. the game system is based on their Warmachine and Hordes tabletop wargames so all of us have a reasonably solid foundation in the mechanics so we can kick back and enjoy the stories. Prinny is currently running a camapiagn for us which sees the group on a smugglers ship on the way to The Protectorate of Menoth to deliver some stolen Military Warjack Cortexes. However, our ship's captain has just made a short stop on the Isle of Cryx and we left the last session as the nasty necromancers sprang their trap!

The skin tone on the Nyss is supposed to have a 'slight' blue tint, unfortunately my first attempt at this left Nevyn looking like a very pissed off Smurf! I do think I've gone too far the other way with this repaint but Nevyn is stuck with the slightly pinky look as I can't be bothered to repaint his skin again!


next up was some more terrain for Infinity. I was inspired by those HDF buildings I reviewed a few weeks ago and started making some similarly styled buildings out of 3mm Styrene sheet. First up, a two storey apartment building 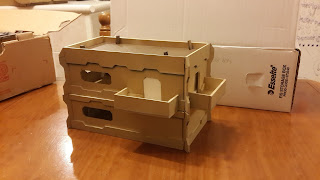 then an 8" square objective room 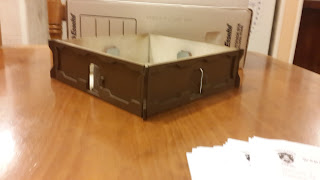 this one is going to get some pearl blue spray on the interior to give it a lighter, more 'sciencey' feel...

then some walls, about a dozen of the tall ones and 20 small ones 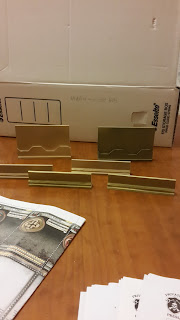 and, what would the future be without a couple of dumpsters and small raised garden 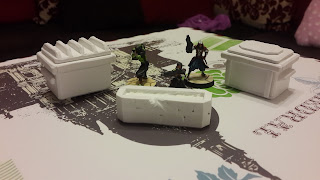 next up was a little side project to get me painting something different. This is Witch Hazel from Hasslefree. She's not for a game or RPG I just liked the mini :) I have a custom base I made for her out of Fymo, that's been baked hard and is waiting for painting before I fix Hazel levitating above it.. 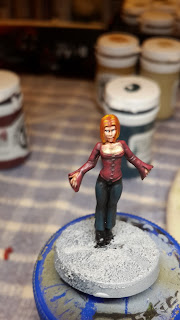 Next up was a project that McBeth and i have had on the back burner for quite a while. We've played a few games of Ambush Valley with some 20mm plastic figs but really wanted to give it a go in 15mm to take advantage of the range of minis available so I'd picked up an NVA infantry box many months ago and finally gotten around to putting them on bases! 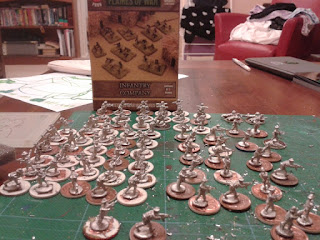 With a local Warmachine Tournament coming up in mid September, I've also been bashing around with lists and putting a few minis together...

Three Brute thralls up first - think steam powered zombies with 'roid rage and you're there. 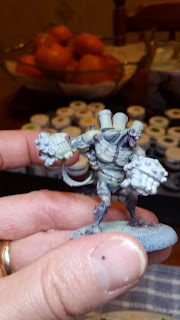 I have restarted these guys since this photo - I think i went way too heavy on the purple in the base for the flesh and they just looked like walking bruises. They're currently back down to a base coat and a much lighter purple wash.

finally my Kraken! this guy is on a 120mm diameter base to give you an idea of scale. the 'mini' has had all of the highlighting and detailing finished but I'm toying with the idea of weathering and chipping to give it that well used look. The base is still a WIP, the concept is a woodland stream with steep banks and a couple of trees. I'm taking a step back at the mo and looking for inspiration - I really want to get this right!

It started out life as this: 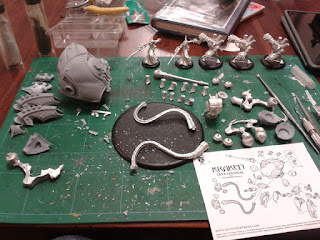 And is currently stalled at this stage: 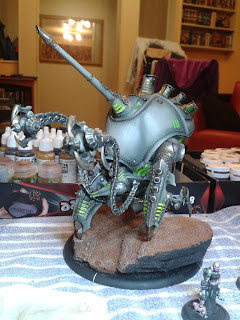 a wee bit of work yet but I need to pick up a decent water effect product and look into some more varieties of flock. I'm also looking a making a tree to go on the right hand side of the base as you see it in the picture.

well, that's me done for now!