Hat tip to Scotty for the title of this weeks post!

We started the day with fellow club member Richard (from his Musings) commenting that it was the first time he'd seen Warmachine in the wild in ages and he was not wrong. Scotty, Tank, Richard, Pelarel and I all gave up WM after the drop of the Mark III release and haven't really gone back to it. Tank and I had a game a while back and were both reminded that we really like the game, we just don't want to play it competitively. So with a whack of the nerds off doing other things, we decided we'd break it out.

Scotty and I had a game between Shae and Amon (battle of the high DEF, low ARM mobility casters) which Shae won, eventually, when Amon was surrounded and beaten to death by a bunch of ratty Press Gangers. I forgot to take any pictures, so I decided I'd blog his game with Tank instead.

Scotty's 50 point list was Shae and the Pirate Package (sounds like some kind of sketchy disco band) with a Mariner, Freebooter and a Buccaneer. Tank bought Karchev, three warjacks (four if you count the Drakhun, which I kind of do), Doom Reavers and a bunch of repair support.


Scotty advanced his Pirates up the centre and his warjacks up the flank. His cunning plan was to outflank the Khadoran heavies, knock Karchev down with the Commodore Cannon and then send in the Freebooter to trash Tank's warcaster. He managed to blat all bar one of the Doom Reavers off the board which is always a good choice. 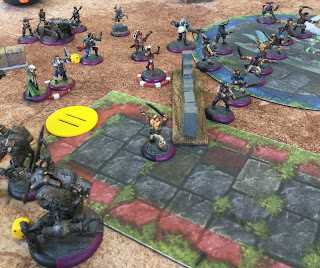 Tank, using Karchev's new spells and some very effective shooting and charging, removed all the Pirates and took the middle of the board and managed to move Karchev into a craftily well defended position. He also gave his whole battlegroup Counter-charge, basically scuttling (see what I did there) Scotty’s plan. 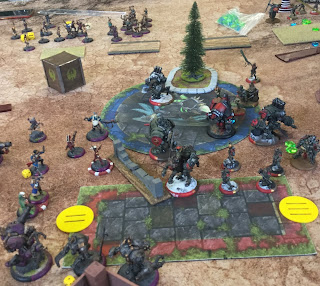 Ove a couple of turns of Road to War driven movement shenanigans, Shae found himself in a delightlfully awkward spot: 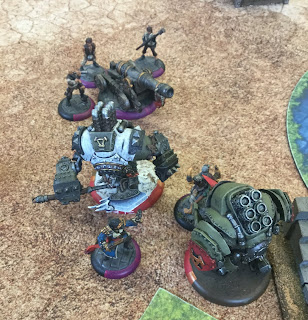 Moments after this was taken, Shae made a mist cloud and ran off! The Commodore Cannon then slammed Karchev away, leaving Beast09 and the Devastator out of his control range - so no focus for them and probably saving Shae's life.
So in Tank's next turn, he could have advanced Karchev, feated and probably ended the game then and there. But he got distracted by a very shiny line of Press Gangers so he *had* to go over and use his spray to get them. Lets just not ask Tank about how that went for him.

Having flubbed his Fissure attack, Tank concocted this crafty plan to knock off Hawk with Beast09 to free up the Devastator to go boom all over Shae. 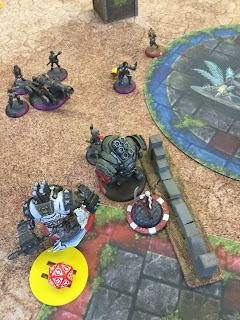 After the earlier incident of forgetting that Beast09 gets boosted attack rolls against warrior models, Tank remembered when he went to hit Hawk. So he rolled some dice:
To make up for Beast being a bit pants the Devastator decided that, in order to sort this mess out, it should explode. Hawk went down to the POW 18 hit, Dougal MacNaile also bought it and Beast09 took no damage at all. ARM 19 beasts POW 9 most days.

So, with the heavies closing in, Scotty decided to call the Hail Mary! and charged Karchev assuming he could take a free strike from the sole Kayazy Eliminator that was giving him a bit of gyp.

Shae's got a high defence and the Kayazy didn't have her gang bonus. But Tank squeaked a hit and then rolled his damage dice: 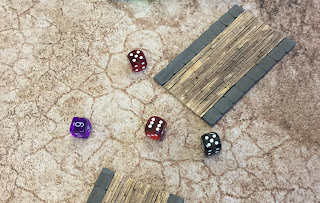 SMORKED! Scotty, by his own admission, was going to struggle to kill Karchev and it was worth a go but, well, you don't really get the chance with dice like that...

Scotty played really well in a game where he was always going to struggle to deal to that much Khador armour and as Tank learned all the things that his stuff does in Mark III he really got that list to sing.

Lessons from the day? Both Amon and Karchev have changed A LOT since Mark II and are quite different. Karchev isn't a one-trick pony (given the loss of Sidearms, Tow and a broken-ass feat) and Amon doesn't grant all his Monky goodness to his 'jacks anymore, just Field Marshall: Parry. Oh, and we definitely need to bring two lists - Scotty's Pirates were always going to struggle with an armour heavy Khador list. Regardless, the three of us are keen to play some more.

I know I was going to have some painting progress, not cheatily blogging two other people's batrep, but with the long weekend last weekend and not enough painting time this week, I have only just managed to finish the Humvee Stingers and make a start on the first LAV platoon.

I like how the MASSTER camo is coming out and I think it'll look hilariously cool when all the vehicles come together too.

Next time:
Some LAVs (and it'll be the only pic till I post the whole army, I promise!) and the converted (at least a little bit) Crucible Guard Trancer. It'll be abundantly clear once you see it what I'm going to use it for.