So I did the thing I said I was going to do! One Eversor Assassin: 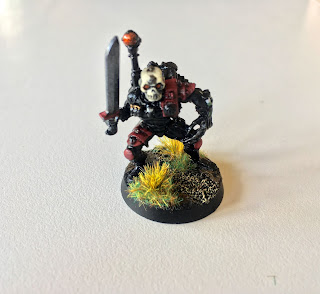 I love the model and while the newer sculpts are heaps more dynamic, the old metals have a charm. I have the Callidus and Eversor now and am on the lookout for an old Vindicare (preferably the alt-sclupt) and a Culexus. Of the two, I'd really like the Culexus, mostly to build the third Inquistorial task force - the Ordo Malleus one. I don't have an Inquisitor Coteaz yet but getting hold of a Culexus would get that sorted fairly swiftly.

Otherwise, what I *need* if I want to put this guy on the park is for GW to put out an Imperial Agents codex that I can use to add single assassins to Imperial detachments and not lose Battle Forged. Maybe one day...

Oh, and the LAVs are done. Just as an aside.

Next week
We'll be playing some practice TY games for Remember December at the club so I'll take some pics on the day of my ugly ass MASSTER army out and about and, with a bit of luck, some of the other Magpies' kit as well. There will also hopefully be some M60s or, if I don't feel like fighting with Vallejo IDF Sand for a bit, something else from the Inquisition box.
Posted by McZermof at 15:34