It's the NZ Nationals next weekend, being run by fellow blogger Pelarel, and he's geniusly (?) agreed to run a one-day TY comp and a two-day TY comp. As I've got many things to do over Easter, I'm just playing the one-dayer but that was motivation enough to paint the 5 M60A1s I need to complete my army.

I've rambled enough before on this blog about the vexatiousness of having to use airbrush paint without an airbrush but a bit of dedication this week, in and around work, led me to this point: 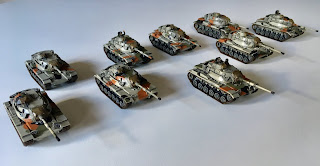 9 M60A1s, painted in MASSTER camouflage. The last five made me so mad doing them but I mixed them in with the first four and they fit like a glove. Very pleased about that.

Here's the whole army for the Nationals - 80 points of Marines! This (less 10 points) will be my contribution for Tank and I when we head for Panzerschreck later this year for the doubles TY comp. 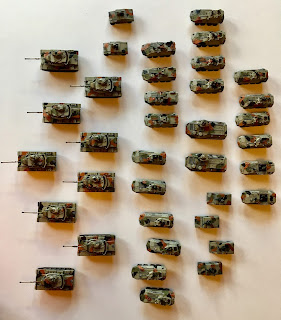 I also painted this guy, while waiting for the IDF Sand to dry: 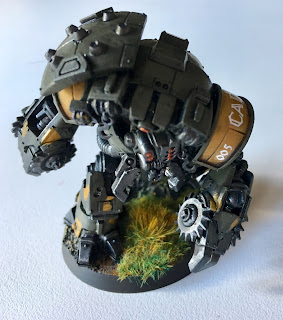 He's painted in my standard Cadian camo and, like Pooch, my Ambot will be pretending to be an Ogryn bodyguard for my officer. It's an amazing model, made out of an amazing kit. I loved painting it and being able to give him the same blobby camo and yellow shoulders as my infantry makes me super happy.

On another note...
I played Kings of War yesterday and it was excellent. Without writing a long review that will reiterate everything the internet has ever said about it, I really enjoyed it. It was logical, with outcomes I expected and lots of fun. Scotty, using his Warmachine models and me, using my Teutonic Order, had a hoot and we ripped through a game in a shade under 90 minutes having read the rules once. Very pleased. So now I need to look at rebasing my Teutonic Order, which I'm not unhappy about, and adding a few bits and bobs. I've got some of the Fireforge Pegasi sitting in their box looking tempting at the mo. Looking forward to getting them put together, but painting white barding again....I am less thrilled about.

Next Time
How I did at Nationals! I'm also trying to make a dent in the Guard infantry and also paint a special project that you'll see in May.
Posted by McZermof at 19:00