Apparently there was an April? And I did some things? Well, more I was away for two of it, and didn't really achieve too much. But I did at least finish some things, including:

1. Paint a new 40k Army- Ongoing!
You know how my army was pretty much entirely elites choices? Well.... It still is.

But, I did make a start into the troops choices, finishing up a batch of 12 regular infantry. Nice and simple, 10 lasgunners and a couple with plasma guns.


Why 12? Well, that is exactly how many I needed to make up a Kill Team of Krieg!

2. Create a table of terrain to support a new game- Done, did that in March

3. Make a modular terrain piece- Still no progress. And no plans. Probably should do something about that....

4. Paint a naval fleet- Done, did that in March

5. Finish something for an army I haven't used in a year and take it to a tournament- Plan is in place, look out for July!

6. Buy a starter box and paint all of it- Done in February

7. Paint every miniature for a game I own- Did this one in February too!

8. Paint a Space Marine Hero each month- On track!
And so my silly little mission to paint up a squad of Storm Lords continues. This time, we have MOAR BOLTER.

9. Paint a stand alone force- Did this one in March!

10. Update and improve a table of terrain- Nothing done.... July I think!

11. Paint something Napoleonic- Started!
Hey, I did do some of these too! I have never actually painted a Napoleonic Prussian, and have always had it in the back of my mind to paint some at some point. I have also too been meaning to play the Chosen Men or Sharpes Practice ruleset, I like the idea of a sortof skirmish/small unit level Napoleonic games.

Cue, one box of the Perry plastic Prussians, and viola, a unit of 16 Musketeers and a single Volunteer Jager. They are the start of the force, which I am hoping to add a few more figures to. Like Fusiliers. And Uhlans. And a cannon..... 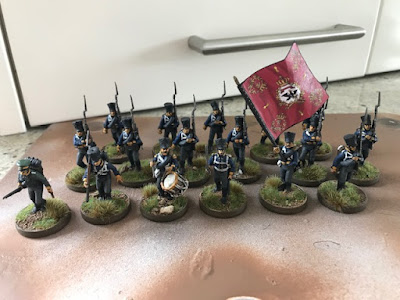 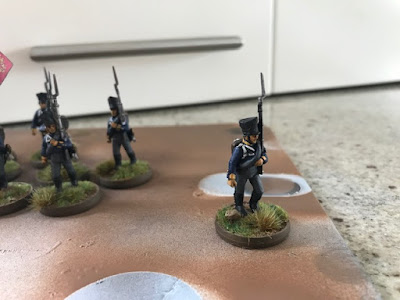 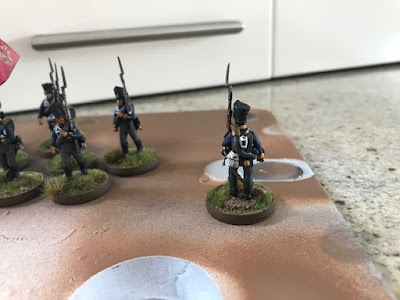 12. Finish what I should have finished last year- did this one in January and February. I only have one more thing to complete for this, but can't seem to bring myself to get them done....

Next month? More Krieg Infantry. Maybe some tanks? And would be good to get another stand alone force done.