I posted these three years ago when I finally painted my Teutonic Order for Impetus. And I've run them a handful of times in that game and found that it's not a game that really let that army work all that well. There's a new version out, which I'll happily try out my Byzantines with but in the meantime, it occurred to me that these guys might have a life in Kings of War instead.

I made one big mistake with that army - a dark basing with a dark flock and I didn't like the look of it much. So while I'm rebasing for Kings of War, I'm going back to good old fashioned dayglo green! 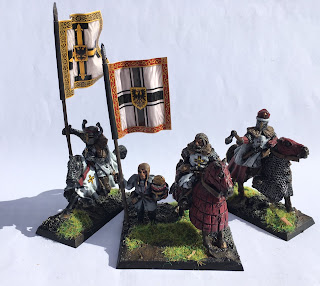 I've started with the army HQ since it was a relatively easy effort to rebase. Much happier with the bright green too. Since KoW is a fantasy game, it would be rude to not have a wizard. The Brotherhood list in KoW has water wizards but that seemed wrong for a Teutonic Order army so I picked up a classic GW Amber Wizard. He's likely to do double duty when we get back to playing Warhammer Fantasy Roleplay as well. The army should also have Water Elementals but I think, given the theme, I'll have treemen instead. Mantic have just dropped some new ones that will warrant a look. 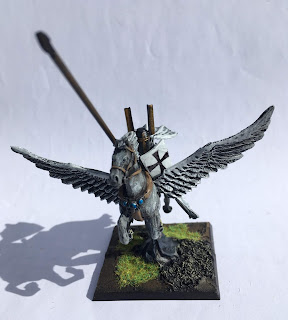 Finally, I painted this guy. He'll be a Brotherhood 'Order of Redemption' hero with his Pegasus. He still needs a flag but I'm waiting for all the transfers to dry so I can safely handle him to put it on. I've got a couple more to do who'll become a unit as well - the box came (amazingly) with 4 Pegasi, one of which has gone to blogger Scotty for his army, and a sprue of Teutonic Order knights. The unit should have three but I doubt I'd fit three on a 150mm wide base, given that this one is nearly 100mm wide at the wingtips!

Workbench
Given my fairly unrelenting focus on Guardsmen of late, and Pooch reminding me that there isn't that many painting weeks before the competition I'm painting those Guardsmen for, I still have a couple of fairly serious bits of work to do. But I also don't have some of those bits yet. So I got to work on the workbench. I've managed to get 5 M60s assembled for my TY army, the third Sentinel for my Guard, a new Deathwatch Biker and 7 out of 9 new Primaris Marines for a longer-ranged Fortis Kill Team for my Deathwatch. The new updates for Space Marines from GW have got this project up the priority list quite quickly!

Next Time
Maybe some sci-fi? Maybe not. I'm also only a couple of weeks away from one year of weekly posts which is quite exciting. I've got a bit of plan for a painting project that I've always wanted to do but that but it does depend on it arriving from the UK between now and then.
Posted by McZermof at 19:04