Well, it's a late update (damnit). But, little man had a birthday and a birthday party over the weekend which sucked up my time.

Seemed only right that my first late update came the day after my first early update right?

1. Paint a new 40k Army (On track)
September was a good month for the Krieg, I managed to finish up....
- My last 10 Guardsmen, meaning I now have 5 fully completed squads
- Another Commissar
- The Vindicare and Callidus Assassins
- a SHADOWSWORD

Let's start with the infantry.  By finishing up these last 10, that means that I have completed all of the Krieg infantry I have got! 5 Infantry Squads, 1 Special Weapon Squad, 2 Command Squads, a squad of Stormtroopers and a Veteran Squad make up my full allotment of infantry!

It is the Guard after all!


Onto the Assassins. My plan was to paint one per month.... but I bought the Vindicare, and then put the Callidus on back order (it wasn't in stock). And then they both arrived at the same time. So it would have been rude to not just paint em both, right?

And importantly, now I have finished X-FORCE!

Lastly, but certainly not least, is the Shadowsword. I got it pre-made from a trading site for a bit of a steal, and it's sat undercoated for nigh on 6 months. It was a super sunny day one weekend, and that inspired me to get it done. My method was to use different spray cans and masking tape to do a representation of a WW1 German tank camo scheme (yes, purple is historically accurate). Ended up working more or less how I wanted it to. Always a good plan to test a new method on your most expensive model right?

2. Create a table of terrain to support a game (Completed)

3. Make a modular piece of terrain (Not Done)
But, I still have a plan. And the pieces. Just not so much of the prioritisation....

I painted them up as French vessels, and much like McZ's review of Aeronautica, I wanted to not like them. I really did. But they were a dream to paint, and even without sails or rigging they look great. I'm sorely tempted for more, but right now I am going to resist. 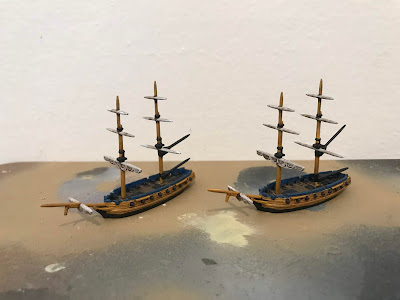 5. Finish something for an army I haven't used in a year, and take it to a tournament (Completed)

6. Buy a starter box and paint all of it (Completed)

7. Paint every miniature for a game I own (Completed)

8. Paint a Space Marine Hero each month (On track)
This was the one most at risk of failing this month, I only completed these two the night before the end of the month (oops)!

When the original Space Marine Heroes came out in Japan, there were actually 13 models, but only 9 released in NZ. To find the other 4 missing models, I had to buy the Space Marine Adventures box  from Barnes and Noble in the US, and have it shipped out to me. Such is the price you pay to be a completionist! But, looking at these two models, I am really happy with my choice to do that.


Another month down, and two more Space Marine Heroes done!

10. Update and improve a table of terrain (Completed)

11. Paint something Napoleonic (Not done)
But it is started!

12. Finish something I should have last year (Completed)

Mortywatch!
Morty now has a base, and colourful minions!


Next up? With all of the Krieg infantry done, it's onto tanks. And I have many. Oh and I will be back playing the Narrative Comp too!