It's been a pretty busy week, mostly prepping to start running a 5e DnD Curse of Strahd campaign for the lads. I'm really looking forward to it but I'm taking the opportunity to prep more seriously than I did for our last 5e campaign.

Strahd looks like a really interesting campaign as it's not a straight dungeon-crawl and allows for a nicely constrained open world. I really like the thread of a plot that runs through it that's generated by the DM before the campaign even starts as well. Our group is also trying to be more role-play-y which I am super excited for and definitely suits the campaign and the setting. One day, maybe, I hope to be able to run a 5e Dark Sun campaign but in the meantime, Ravenloft, my other favourite setting will have to do. And if this one goes well, which I hope it will, I'd really like the party to carry on with these characters. There's a charm to being able to do that.

I have been doing a little painting this week on the side although nothing all that serious. I've started on a Squat model I got from Victoria Miniatures as a bonus when I ordered my Permitted Abhumans. I've just got most of the basecoats and initial washes on at this stage but he's coming along nicely. 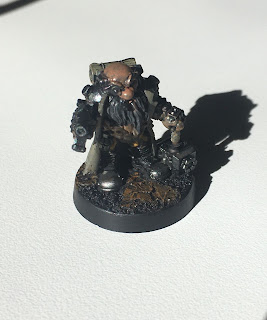 I've just realised that unless the new Inquisition list really adds something special for Acolytes, I should rebase him as the Squat Bounty Hunter for Necromunda. Probably should have thought of that earlier...

The other model I've been working on is for one of our RPG groups upcoming games in 2020 - blogger Pelarel has picked up Warhammer Fantasy Role Play 4e. We've played earlier editions a few times but 4e looks like it might really have kicked it up a notch in playability, which is cool.

The last round we played I was a Wood Elf Mage, a character that felt a little bit out of place in the pre-Age of Sigmar Warhammer Old World. I did enjoy the wizarding though so have decided to go a bit old school / a bit new school as part of trying to get more role-play-y. 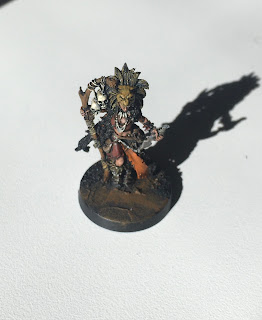 This fabulous mini is from Hasslefree and will be played as an Amber Wizard. With that in mind, I've deliberately tried to limit myself to a palette of orange, red brown and yellow, with only the grey and bone as necessary colours outside that palette. The head is going to eventually be Leopard-print (!) and I've got some amazing reference photos for yellow feathers that I'll see if I can replicate.

The Amber Wizard should be a challenging character to play in a group RPG as they are generally loners and somewhat non-conformist. That should provide some opportunity for some interesting interactions and conflicts with the other players though and give me a really clear steer about what a character would do in a certain situation.

Next Time
It's club day again. Quite what that means is anyone's guess. I might try out my 55 point army for our end-of-year Flames of War competition or Pel and I will get in a game of Zone Raiders and I'll batrep that out carefully. With a bit of luck, I might have finished up these two models by then as well.
Posted by McZermof at 17:00