End of the Christmas break workbench

So it's the last day my Christmas break before I go back to work and I'm spending it not relaxing like I should be but working outside filling nail holes. But there's always time for a little bit of hobbying.

Our next RPG for our group is going to be Star Wars: Edge of Empire and, like our last playthrough, I'm going to be running a Trandoshan because who doesn't want to play a 7-foot tall bipedal lizard with claws? 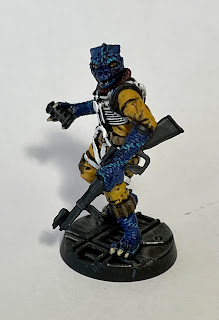 not-Bossk. In fact, Rokrassk.
I used the Bossk model from Star Wars: Legion because it was a good chance to try out a model from the range and, honestly, it's a great looking figure. He had to have the same yellow and white flight suit as Bossk but after the excellent episode(s?) of Clone Wars on Disney+ all about Transdoshan hunters, I decided to do him in a different colour that would contrast a lot more with the flight suit, so blue!
Star Wars: Legion hasn't (amazingly) triggered our group to go all nerd on it but I really enjoyed painting up not-Bossk and wouldn't be averse to doing some other Legion models. They're beautifully detailed and very evocative of the on-screen versions.
MOAR Ghosties

These Dreadscythe Harridans are such cool models. They're creepy AF and stunningly dynamic. They were a real challenge to fit onto a 125mm wide base, that's for sure. I've got a couple spare that didn't make the cut in the end so they'll get painted and based up for use in Frostgrave. These ones will be Phantoms in my Kings of War Nightstalkers army.

The second to last base is this one:

It's a fairly similar to the first one but the Harridan box is quite nice in that in the 10 models, there are only 2 pairs that are identical and the other three can be made up in two variants, which is nice. I have no idea how anyone would use these on round bases. They'd be a nightmare and they'd probably just blow over in a breeze.

I think I'm aiming to finish the painting for the Ghosties. The second base of Harridans won't take too long, then it's just the Hexwraith Cavalry to go.I haven't worked out a basing scheme for them yet but I have lots of ideas so I'll probably do up a couple of test bases and see what I like before embarking on basing the whole army!