One of my favourite periods is the American Revolution (or War of Independence – depending on what side of the sea you come from). I really enjoy this period, probably even more so than the Napoleonic wars.


Over the years I’ve looked at doing 28mm battalion scale games but never really started anything serious. I had dabbled in skirmish games for this period namely ‘Smooth and Rifled’ and ‘Muskets and Tomahawks’ so had some of the Perry plastic AWI British. A while back, I saw that Old Glory had started stocking the Wargames Factory plastics for the American Revolution and as we use the club discount deal, I got myself a pack.


Prinny and I have started on a rather large project for this period and so I thought I’d use this box of figures to get one or two battalions for the British. Now that I have assembled and painted some, I thought I’d do a review.

The box is nice with great box art and adverts for other box sets that WF does. Upon opening the box the first thing that struck me was the apparent range of options that the sprues offered. There were 12 mannequins on the main sprues with four different head/hats plenty of arms and even spare muskets. The Command sprue also had 6 more mannequins plus plenty of arms, hats and extra swords. 30 or so figures for not much $$? Nice.


The mannequins and head/hats themselves are designed with a computer program rather than sculpted. This leads to some very crisp lines and folds and the faces are very expressive. There are lots of very distinct folds in the clothes and little things like the bearskin on the grenadier’s hats, the cockade on the cocked hats and the flintlock mechanism on the muskets are very well defined.


With those good things in mind let’s move on.


As I was assembling them, several things came up, spoiling this boxed set for me.


The figures are tall to the eye. Very tall. They dwarf the Perry sculpts when standing side by side. This is compounded by the fact that the WF figures are not actually attached to a base. The bases are supplied separately and are quite thick (maybe 3mm). This means that when you stick them to a MDF base, like I am for Blackpowder, the feet will disappear into the basing material that I will use. Adding a base to the figure (to also aid with adhering to the MDF bases) will also increase the height if the figure. The height is also exacerbated by the relative thinness of the figures. Entirely in proportion to the height but never the less thinner that the Perry figures.


The nest thing I noticed about the sprues was that the variety that I had initially seen was all an illusion. Upon looking that the assembly guide supplied in the box, each mannequin actually only has one pose! I thought this would be fine in that the one pose, say, firing, was able to be done for both line and light/grenadier poses (or course the light/grenadiers have the winged epaulettes on their shoulders, while the line do not). This is not the case however.


That in itself is not an issue if the mannequins (Letters) could do different poses. But mannequin A, for example is the firing pose. That means you can only have Line infantry firing, not Light or Grenadiers. 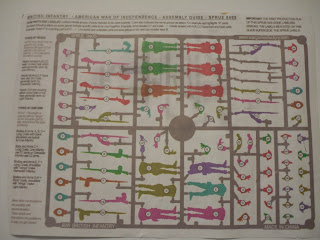 I thought, “Bugger it, I’ll just make them all Line and damn the uniform changes”. However, there are not enough hats to do all one type! On the main sprue there are 10 cocked hats, 8 grenadier bearskins, 4 half-cocked hats and 4 cut down hats. There are more heads on the command sprue, but they are really for those command figures.


Bugbear alert. During the AWI period the British routinely separated their Light and Grenadier companies from their parent battalions and formed composite separate Light and Grenadier battalions. That means I’d like to be able to form units of either all Line, all Light or all Grenadiers. Is that too much to ask?


Compared to the Perry AWI British boxed set, the variations offered as a selling point for the Wargames Factory set are all fool’s gold. While the Perry set only gives you two poses, it is consistent in its style of uniform and gives the option to equip all the figures with the same type of hat. The Perry set is a bulk box of cheap ‘dudes’ to fill out your metal battalions and it does that very well. The WF set offers variety, but only if you use the figures all as a single unit. Put side-by-side with Perry, Wargames Foundry, Redoubt, Kings Mountain or any of the other AWI manufacturers, these Wargames Factory figures just don't fit in well.


﻿
These WF miniatures certainly paint up well, the expressions on the faces makes painting them easy. Same with the folds on the trousers and shirts. However, those folds are rather over emphasised and it makes the trousers in particular look like MC Hammer pants or something.


All in all, I’ll not buy Wargames Factory AWI figures again (I suspect that their Vikings and thegns are ok). For plastic figs for the AWI period I’ll stay with Perry Miniatures. At least I can get some variation to their mannequins by repurposing the arms from the Napoleonic British set that Perry does.
And for further painting pictures: 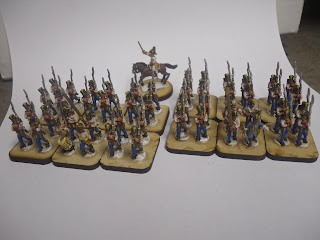 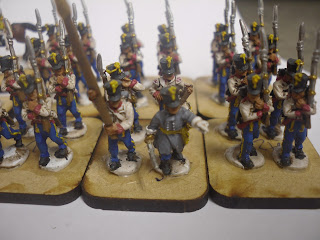 The 1st and 2nd Battalions of the Infantry Regiment Freiherr von Mariassy de Markus et Bastis-Falva Nr. 37. Slowly getting through these 15mm Napoleonics!
﻿﻿
Posted by McBeth at 15:51