What, pray tell, is a wizgang precisely?

1. a group of soldiers led by a wizard for the Osprey Games publication "Frostgrave."
"I've finished my wizgang! Shall we play a game of Frostgrave?"
synonyms: warband, mob, army.


So this post comes a few days after I finished the project, but when I went to write it Pooch already had a post up and Tank's architecture photo op was already in the works. Patience, dear reader, is a virtue I am told.

To be fair, this wizgang has been something of a work in patience as it's taken me some months to locate and paint a suitable wizard model to lead them. But they are finally done. 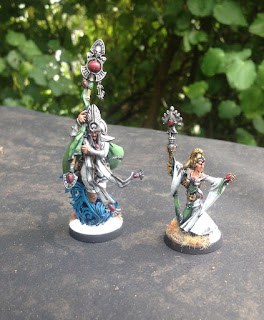 The Wizard and his Apprentice. The Wizard is from the Island of Blood set from GW and painting him was the first time in a long time I've painted a model in bits. Points for the design though, he just slotted together. There's no glue there at all. The Alarielle model is just an old favourite. 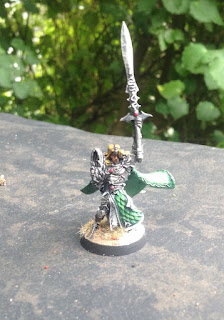 The Captain. I don't have a copy of the new expansion for Frostgrave yet but it's on the list. I picked this guy up at a bring and buy locally last year and have been wondering what to do with him. He's quite the captain model though. It's not GW although I found the model recently while looking for daemon substitutes and now I can't remember where! 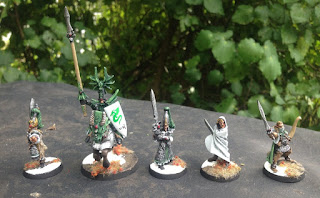 The specialists - from left to right - the Barbarian (White Lion of Chrace), the Knight (Dragon Prince of Caledor), the Templar (Swordmaster of Hoeth), the Treasure Hunter (Aenur, the Sword of Twilight) and the Tracker (Shadow Warrior). It was nice to paint one model from of each of the serious units from the old High Elf army (and if I can get hold of a Phoenix Guard, I'll absolutely add one in!) and the Aenur model from Mordheim has been sitting in my bits box for....well, since I got him when I still played Mordheim. I know there's no cavalry in Frostgrave but the Dragon Prince was too nice a model not to do. The Men-at-Arms - these Maiden Guard are some old favourite models of mine and I wanted a couple in the wizgang to go with the Alarielle model. It seemed fitting to have them in. 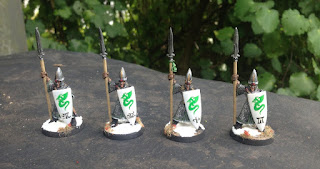 The Infantrymen - the traditional High Elf spearmen. I figure that campaign-wise, I'll start them off as Thugs (just because it's more practical) and they'll grow into the role. 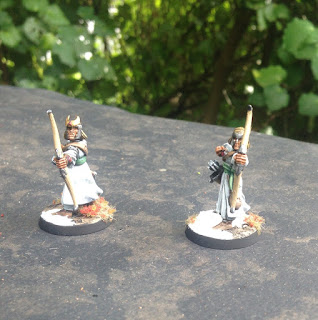 The Archers - because what respectable High Elf doesn't bring a couple of these? The new plastics are quite nice and painted up well. 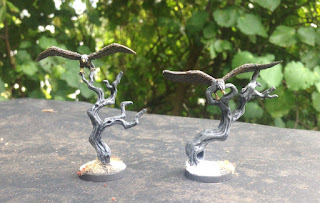 The Warhounds - after a fashion. Eagles are somewhat more Elven so I figured they'd do. And I like the models too - culled from my no-longer used Malifaux collection.

I've taken the Elves out for a run and with an Illusionist, a very different spell list and different ethos, they've been a nice change from my Orcs and my repeated blatting of things with Elemental Bolt. The spells de jour have been Shield and Glow thus far and while they haven't been desperately successful so far, I suspect that when I pull them out for our next campaign day, whenever that may be, that they'll be quite a bit more useful.

Check one project off the list for the year. Only about a dozen to go. Here's a sneak peak at a couple of the AWI figures I'm painting for Triple T which are now on the block:
I have to say that the Perry AWI metals paint up beautifully. I've started on some of the plastics now and I'm not enjoying them half as much. Mercifully, once I've cleared the 1st and 6th Maryland for Triple T, I'll start on a combined battalion of Hessians for McBeth and those, well, those are going to be a treat.