Plan for what is difficult while it is easy...

...do what is great while it is small - Sun Tzu

I wasn't that organised for club day today and it was all a bit random! I wound up having a test game against Tank for our club end of year event in a few weeks - mostly for us to try out a list each for Late War Flames of War - something we haven't played in ages. I planned to blog it but forgot to take any photos and, as it turned out, that was a happy accident. Suffice to say that Tank's dice were simply appalling and while he fought bravely, his Shermans went down to my StuGs in a bit of a screaming heap.

So instead, I watched some games of Black Seas (and it does look fun but no! I will resist!) and played another hilarious game of Aeronautica Imperialis. We played a both sides "bomber escort"game and both sides singularly failed to protect their bombers. The Orks got exceedingly close to their target but didn't quite make it.

But I did finish something! 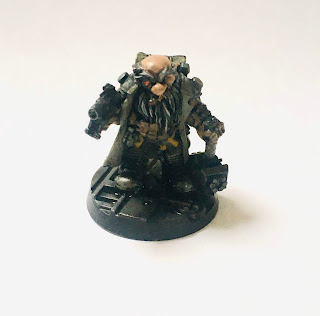 I got the Squat rebased on a Necromunda base and finished up the details and highlights. He looks pretty good and was a lot of fun to paint. Victoria Miniatures does make some lovely models indeed.

Planning for 2020
Having said that, because I haven't been painting all that much lately, I decided to try and do something else productive instead. I've been thinking about what I'm going to do in 2020 and decided that step one was to find all my part-completed projects and maintenance and clear those out before I go down any more rabbit holes. And this is what that looks like:

But McZ, you say, a lot of that looks painted. Yes, dear reader, it is. But much of it needs some serious TLC. The basing and transfers on my 653 Schwere Panzerjager Abteilung needs work and there are a lot of repairs that need doing to my StuG Abteilung. And small numbers of bases that need redoing in my Sperrverbande will also get me up to full size Grenadier platoons. And I'd like to finish tidying up my Pacific War Australians and play them in MW. There's knights that need finishing for KoW, Deathwatch to do and some cars to take on Gaslands in 2020 as well.

That's not even all of it either. I've got some terrain inbound to add some more scatter to my Infinity board and some more elevation on my FoW board. I've promised myself I'll clear out the drawer of shame and find homes for all that too.

I've enjoyed Pooch's model of setting himself a bunch of tasks and completing them over the year. I think I'll try the same with the projects - I'm thinking I can package up all of these into groups and try and finish one a month in amongst gaming and RPGing.

Next Time
Some actual content. That isn't me just pontificating. Promise.