In which your author paints MASSTER and more white....

...and regrets some of his palette choices. Again.

Things what I have painted

First off, here's Month 2 of the Stupid: 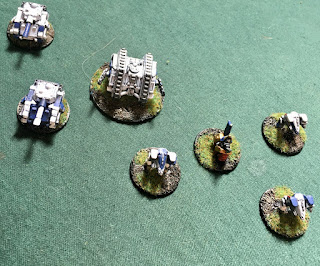 The first chunk of my World Eaters - two Predators, a Landraider, three Helbrutes and a Lord on a Juggernaut. I hate myself for picking ANOTHER white army. You'd think I'd either know better by now or that I'd be good at it. Clearly, neither of those things is true. However, they are a nice counterpoint to the horde of red that is the daemons.

I also *finally* finished my 15mm Team Yankee army as I played a game with clubmate Russell (more on that later) and decided that it was about time I painted the last 5 M60s. So here is the 2iC and the third platoon of 4 M60A1s. So with that finished, I think that this army is pretty much done. I'm umming and ahhing about getting two more Sergeant Yorks for the army and I'm working up a plan for some chopper transport for my Marine platoon but otherwise, I think I'm done with Marines. 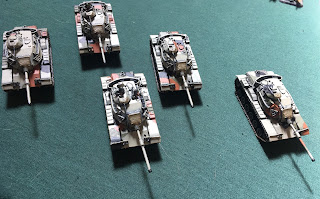 The question now is "should I do a WarPac army?" I'm tempted by a second TY army as I have enjoyed painting the modern kit. My first instinct was ANZACs but we are suffering locally from a dearth of WarPac armies so that's led me down two other routes. I'm tempted by Afghansty, especially with Battlefront indicating that a HiP kit is due later this year or potentially by Iranians, who will be painted as Jordanians until such time as a Jordanian list becomes available. The slightly vexing thing there is the kit mix for the Jordanians falls somewhere between the Iraqi and Iranian lists from Oil War. We'll see.

Games what I have played

Clubmate Russell is running a 100 point on 6x8 tables event later this year and we decided to play a test game. Here are the two photos I remembered to take before we'd even started. At the top, my right flank and it's spearhead: 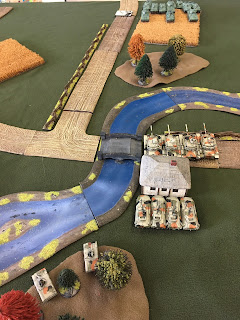 And then Russell's right flank and it's spearhead. This is why 8x6 tables folks! 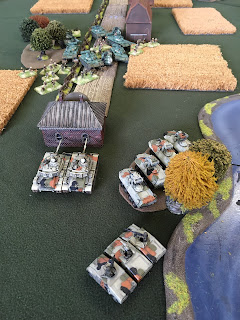 First off, it was a great game. Russell is a very very good player and I always find playing him to be a real challenge because I am not. I generally find that I like to just put in a competitive showing! While in the end it was a 3-3 draw because we ran out of time, it didn't feel like there wasn't a chance for a result. Russell's dice had been appalling for most of the game and I had managed to get my Marines in place to stop him winning on his right.  I think one more turn he would have been broken as I only had to remove one BRDM and two Gaskins to get there. If I hadn't picked a dusk attack and suddenly failed to see properly at the last, it would have been easy!

Just as importantly though, it was great playing on an 8x6. My terrain collection is very Eastern Europe farmland themed so there's not a huge amount of LOS blocking terrain. It's not super dense either but interestingly the size meant that there was a decent amount of room to move around outside the ranges of most weapons, which is a nice balance. It also made spearhead SUPER relevant because in a game with 48" of ground between deployment zones, you can spearhead very aggressively. I spearheaded first with a view to beating his Carnations with my M60s and taking their objective, missing the fact that Russell could make a 40" road move with his BRDMs and be as close to me as possible in turn 1. And then he went first. Not ideal.

I also played my first game of Apocalypse with the 6mm stuff yesterday too with Scotty and Tank. It was more about learning the mechanics of the game (which are fascinating, different to 40K and quite a lot more brutal) and trying to see if making no changes to the stats would work in 6mm. The conclusion, at this point, is that we'll leave command and deployment in inches and move everything else to cm. That avoids turn one Bloodthirster charges which, while I doubt would be all that effective, would be unfun. In principle though, it worked really well and putting 500+ points on a 6x4 in 6mm will be AWESOME. And it'll look great. I had better get to basing up my old Titan Legions buildings.

Next Time
Almost certainly a painting / workbench blog as I am starting to have to pick up some of the more taxing tasks on the table of doom. I'll be prepping the bases for Month 3 of the Stupid and painting some sweet sweet initiative markers that one of my Wednesday night DnD crew ran up on his 3D printer.
Posted by McZermof at 14:57