I've been a bit all over the place with working on stuff this week so I've not managed to finish a thing but have managed a few random bits and bobs along the road. So here we go!

Australians
I built this army as part of a Morganfest competition (where the tables, armies and scenarios are fixed, the players move) where Tank and I built Aussies and Japanese for a game drawn from the battles around Gona, Buna and Sanananda in the middle years of World War 2. 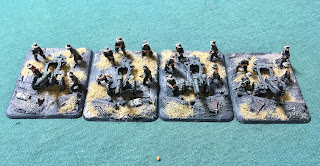 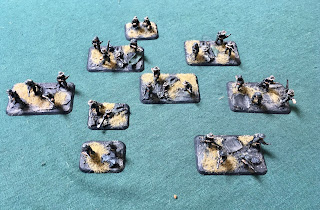 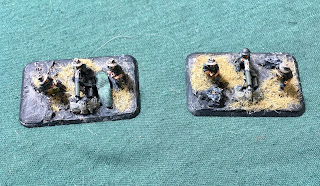 I definitely took some liberties (like using the cut down 25pdrs, which are far more appropriate for Kokoda than later) but they were too cool not to do.

Most of the army got a tidy up and repaint a few years back when Tank and I took a doubles army of Marines and Australians to Panzerschreck but I never got around to finishing the job. So I've gone through and tidied up the third infantry platoon, the 25pdrs and a pair of Vickers HMGs. I've got another pair of Vickers on the painting table alongside a sniper (I know, but I had a spare...)

I've also ordered a pair of Sentinels to go with the one I already have as part of proxying these as MW Australians and some PIATs (all from Eureka in Australia) to make them LW compatible. I am having ideas of making up some Matilda II Frogs and treating those as Churchill Crocs for a LW army.

Gaslands
This is one of those games I've wanted to play for ages and somehow, it didn't take much to get some nerds on board. I found some sweet French cars in a model store in Australia and decided they'd be the basis for my first set of Gaslands cars. 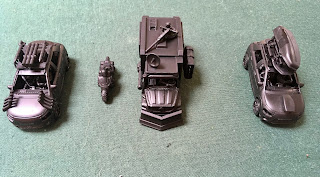 They come from a set of desert rally vehicles so I think I'll stick to that sort of a theme and am going to paint them up as a kind of desert pirate crew - some random desert camouflage and some sort of emblem for the crew which I haven't worked out yet. I've got a spare roof box for the car on the right too which I'm quite keen to fill up with a different weapon load out. I'm definitely going to do some more and go for a more post-apocalyptic vibe the second time around.

Apocalypse
I blame blogger Scotty for this. He got some of the AT Knights and I decided I wanted some too. I'm almost certainly never going to buy a Cerastus Knight from Forgeworld so I got the AT versions instead! 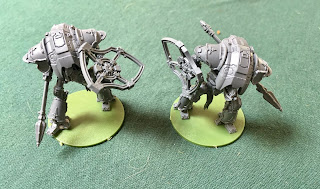 These two Lancers will go on table as Super Heavy hunters or escorts for Angry Ron when I get him out. They are super detailed and surprisingly posable for the scale. I am looking forward to painting them.

Next Time
We're playing some more TY on 8x6 tables in a week's time so I'll report on how my Marines get on for those games. I'm ditching the air support altogether for these games. We'll see how that goes.
Posted by McZermof at 16:23