Once more into the backlog!


I've been doing all sorts of random stuff this last week and finally (FINALLY) done some work on some things that have been waiting far far too long for progress.

I bought these direct from GW in the UK more than a decade ago to use as a Necromantic warband in Mordheim and I think I might have played them once or twice. They've been used as a Wizgang in Frostgrave and I have most of the parts for a decent KoW Vanguard list too. I'd just like to hunt down a couple of the classic Ushabti to finish that up. They've had a touch up of the paint over the last week and I finished up the swarms, a couple of new skeletons and a pair of giant spiders. 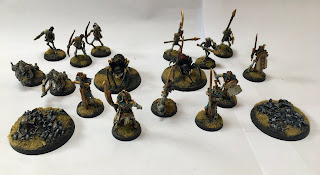 The spiders are also from the Drawer of Shame. They're the mounts for the current generation of Forest Goblin Spider Riders and we picked up a bunch from some place at some time and shared them out amongst the nerds. These have been waiting for AGES to get done and will serve as proxies for scorpions. Because both are arachnids. That's my story and I'm sticking to it.

Brotherhood
Oh my goodness. I did it. Finally. I painted some knights!!! 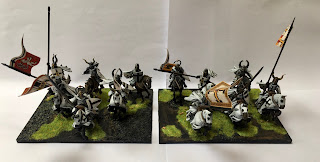 So these are the two regiments of the 'Order of the Brotherhood.' Basically my line cavalry. I can't believe it took me this long to get it done. Ugh. So finishing this army won't take too long now. 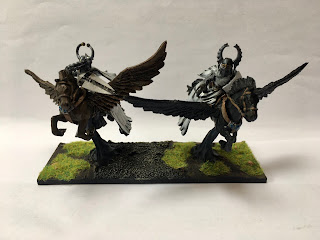 I also painted these 'Order of the Forsaken' Pegasus knights too. They're super cool. The resin Pegasi from Fireforge are kind of rage inducing - they're super gappy - but an insane amount of filler largely fixes that problem. 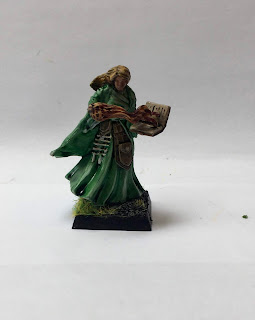 Finally, I painted an 'Avatar of the Green Lady.' I'm not crazy on Mantic's figure and honestly, I'm not super crazy on this Nolzur's model either - the details are really shallow (especially on the face and hands) but it's a good stand in until somewhere along the way I can pick up an old Wood Elf Spellweaver to take it's place.

Deathwatch
And just because I felt like doing them, a couple of Vanguard marines for my Deathwatch. This is part of an evolving plan to redesign the army a little to emphasise the Primaris Kill Teams and use my Veterans as a more rapid strike unit. 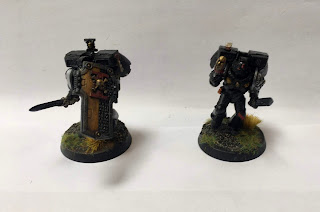 And from the Drawer of Shame
The only Protectorate of Menoth model I own that I hadn't painted. 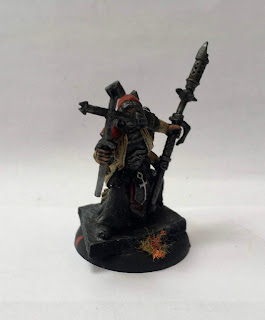 At some point I acquired a second Reclaimer to run an old High Reclaimer Theme Force. Which, as you can imagine given that this one just got painted, NEVER got used. Whoops.

Next Time
I'm working on a new warband for Dracula's America using my old Malifaux models and am trying to finish up the last two things for my Brotherhood army - a regiment of the 'Order of Redemption' and a 'Beast of Nature.' It's also going to be May, which means more work on the Stupid. Pooch and I are going to hit 100 PL again in May because why not? That'll close out my Khorne, which I'm quite excited about.
Posted by McZermof at 16:02