So we begin this week's achievements with maybe the easiest painting / modelling project that anyone ever undertakes - making some statues out of old models. I've had a few of these old 1st edition multi-part Chaos Warriors hanging around in a bag for precisely this purpose for way too long. So I did them. They're definitely this week's 'Drawer of Shame' contribution!

They'll go in with my 40K terrain which, given that it's mostly made up of ruins, also works well for Frostgrave! That's where these chaps will likely see service. They do have the advantage of being quite big and so are actually hideable behind for most normal scale 28mm models which is kind of neat.

Dracula's America
The Crossroads Cult, that I have played in all our previous games of DracAm has been....a bit iffy for me. The summoning rules seem really good when you can have two extra d10 level models on board, especially in a one off game, at one time!

So I dug into my old box of Malifaux models to see what else I could come up with and the answer, amazingly, seems to be the Congregation posse. To be quite honest it's mostly been about the fact that Marcus makes an excellent Hougan and the Malifaux Razorspine Rattler will be an epic Temple Snake.

I've painted up Marcus and Miranda as the Hougan and Vessel to lead the posse. Marcus is a great model and while Miranda is a bit bland, she kind of feels like the pose is right! 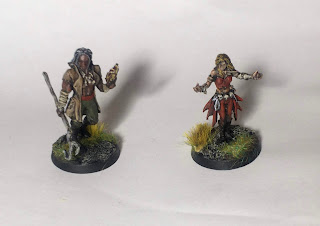 Then I added two M&SU Miners as my zombi (with a third one up my sleeve if I need it) because I decided to go for the classic 'mind control' voodoo version of zombies, rather than undead. Also the aforementioned Razorspine, that didn't even get repainted. I spent a lot of time getting the diamondback pattern on there and by god was it staying there. 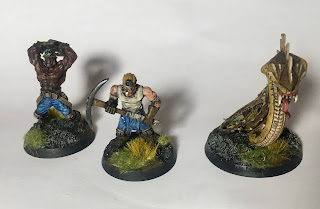 And  finally, three gunfighters - Hans, the Convict Gunslinger and Rusty Alice. I always loved the insane 'sniper' rifle that Hans has and giving the gunslinger Prison Orange pants was too good an opportunity to pass up. 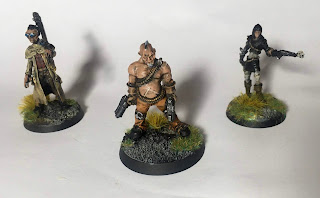 Next Time
This month's contribution to the Stupid. I've got a lot of the base coats on so just have to do all the highlights. Towers of Skulls are *not* helpful for this. Also I've block painted the last of the knights for my KoW army so they should get done too. I've got another half a dozen or so Malifaux Arcanist models as well that might be able to do duty as a different posse in DracAm - probably Tong as most of them are waving around giant hammers - so they might find their way towards the painting table too.
Posted by McZermof at 17:21