What if I told you....that it's possible to forget how to nerdgame?


Boy oh boy is it possible.

A bunch of the nerds piled round to Pooch's garage yesterday for some games and upon our collective arrival discovered that we'd all brought models but apparently our communication skills did not extend to who was bringing the terrain. It was...not our best work. So Pelarel and I had a crack at Zone Raiders again, while Scotty took on Tank's Orges and Pooch's Goblins had a crack at McBeth's Undeads in Kings of War. Highlight images from Pooch and McBeth's KoW:

Tank and Scotty played in the sun and only these two photos came out. Tank's Fleabag riders are some of Mantic's really cool models. And Tank's painted them beautifully. 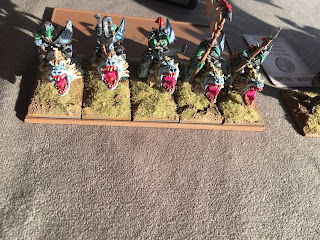 And Scotty's done a clever mod to enable him to use his Warmachine Mercenaries army in KoW. I love these cav too! 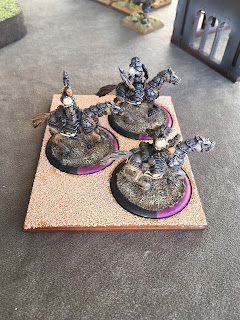 As for me, it was great to play Zone Raiders again. Pel's Reclaimers absolutely smashed my Zone Stalkers twice. Pel's d20 rolling does him no favours in DnD but hells bells, it comes good in Zone Raiders. Reclaimers v. Zone Stalkers, when you haven't played a lot, was a pretty tough match but I'm determined to give it more of a blat. We did use all the rules this time round (with our own missions and deployments) as well as some of the more simple battlefield conditions. It definitely feels to me like a game with the same level of depth as Infinity, but without quite so much of the complexity. My photos in the dim garage light didn't really come out but I did get these two.


I have done literally no painting over the last week, despite schlepping to my friendly LGS to pick up a few key paint components that were preventing me from working on my Primaris Kill Team. But I have done a massive tidyup in my games room leading to this: 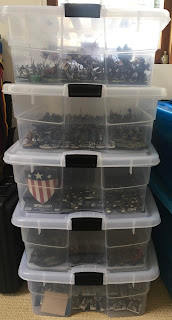 That's almost all my 28mm collection bar my 40K and Impetus, all carefully boxed up and away from dust.  It was really good to do a bit of repair work and sort out the mess. There's still at least three or four more of these to come!

Doing this meant I could take down the project table and move it to the shelf next to my painting desk. This is all that's left from the 2020 project plan:

And that's *with* me adding a whole bunch of stuff from my shame drawers. There are a couple of unopened boxes under my desk, but they'll come out when I've made more of a dent in this last run.


Next time
I'll have finished the Primaris. I'm sure of that. And I'll be working through the last 50PL of Khornate 6mm as Pooch and I have powered through our plans and so we're thinking we'll wind up the stupid at the end of June with ~350 - 400 PL in the bank. And then we'll actually put all the stupid on the table some time in July.
Posted by McZermof at 17:11