I got a few things finished up this week, despite having to do some 1:1 scale painting in the house! 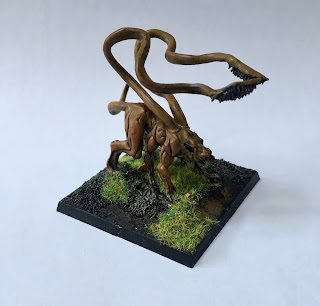 Just one addition to my KoW army this week - a Nolzur's Marvellous Miniatures Displacer Beast. It's a cool model and will be a sweet 'Beast of Nature' in my KoW army. I was, quite honestly, tempted by a Nolzur's Drow Drider  (because that thing is creepy) but I decided this one, painted more like a European Lynx (than the traditional black panther vibe from DnD), would work well.

Having added only one new thing, two of the last four pieces are on the workbench at the moment. Sadly the last two are likely to be on hold till after the UK lockdown is complete so I can order some of the Oathmark Elven Light Infantry from Northstar in the UK.

Time for my contribution to this year's stupid. It's another 100PL month, so I could finish up my Khorne! 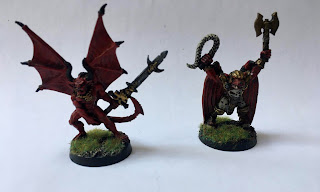 First off, the Daemon Primarch of the World Eaters, Angry Ron*. Sadly, Angry Ron doesn't exist in 8th edition in this form so he'll proxy in as a Forgeworld Kytan Ravager (which isn't remotely as epic, but will do) and a second Bloodthirster. Because I have two.

The rest of May's effort is the remaining Khorne Daemon Engines. Each of these will proxy for one of the Forgeworld superheavies. The Tower of Skulls will play as a Hellforged Mastodon, the Bloodreaper as a Hellforged Falchion and the Cauldron of Blood as a Typhon Heavy Siege Tank. Amazingly, I still have two more of each of these in the box... 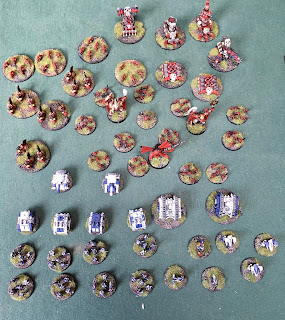 Finally, this is what 310ish PL of World Eaters and Khorne Daemons looks like. Next on the stupid front will be a start on the Death Guard, beginning with the Greater Daemon and some Pox Walkers I think.

*Angron. But come on. How could I not?

Next Time
Fingers crossed, with the easing of the lockdown here in NZ, I'll be doing some garage gaming next weekend and should be able to bring you an after action report of the Order of the Green Lady's crusade against Pooch's evil goblins! If not, I've got some KoW stuff on the workbench that's moving along and I've started on my last Deathwatch Kill Team.
Posted by McZermof at 16:37