It's been a surprisingly productive week that wasn't really looking that promising about Thursday!

Deathwatch Uparmoured Executive
I had pondered aloud at some point that some Terminator characters for my Deathwatch would be really useful - delivering characters to support my Kill Teams isn't the easiest thing to do. As I'm working on some Primaris Kill Teams, some teleporting characters seemed like they could be VERY handy.


Pooch provided me with this epic Captain model as he picked up a spare in the Space Marine Heroes collectible series. It's a fab model and I love the pose.

I have discovered when playing with my Deathwatch that the psychic power 'Null Zone' means that you can really wreck things like Hive Tyrants with boltguns when their invulnerable save goes away. This guy is for delivering that!


I lucked out here. So lucked out. I didn't manage to actually get one of these when the promotion was on, but one of my DnD group picked up two and graciously sent one my way. On top of that, after a con a couple of years ago, one of the players there gave me a Forge World Red Scorpions shoulderpad and that wound up on this guy. And he looks AMAZING.

Lastly a third DW biker meaning that I can run a bike squad if I want to. It is emblematic of one thing that vexes me about the DW lists vs fluff. I should be able to build a Kill Team made up only of bikers and jump pack marines (the book describes it in the fluff!) but because I must include 5 bog standard Marines in the KT, it doesn't quite work. It's a shame really because it would be really fun to have one of those.

Kings of War - Order of the Green Lady 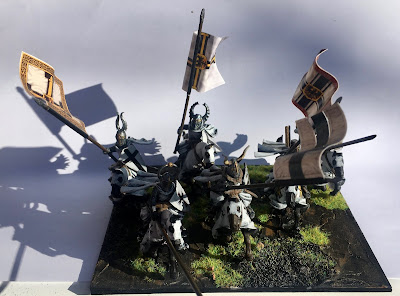 And lo! After much wailing and gnashing of teeth, the last base of Knights was completed and rebased for Kings of War. This base is a unit of the Order of Redemption. The heaviest and most powerful of the knight units in the list. This base alone clocks in at 250 points before I tack on a magic item to make them the hardest hitting unit I can use.

There are still a few bits to finish - I think the Oathmark Elven light infantry is out now (or at least very soon) and that'll be the last two unit bases to do.

Next Time
I haven't got into my 6mm for May yet so I need to get those done and finish up my Beast of Nature for my Kings of War army. I've got a tiny bit of rebasing to do on my StuGs but they've all been scrimmed now too, which I'm really happy with to give them a bit more texture. So photos of them next week. And the hope that as NZ moves towards an even less restrictive lockdown that some of this stuff might be on the table soon!