Since religious lunacy seems to be an underlying theme in almost every army I run in almost every game I play I have rather bought into it.
From distant shores arrived a new box of House Cawdor gangers for Necromunda, along with a Forgeworld weapons pack to open up a bunch of options in the list that aren't in the core box. I also
I decided to do half of them for the moment since staring down another 10 models would probably have been staggeringly demotivating! So here we are: 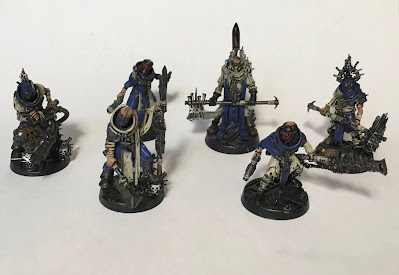 The close-combat crew are kind of neat. The Headsman is the key model (who might also stand in for my Gang Leader if I want....) as well as a chainglaive on the left and a two handed hammer on the right. 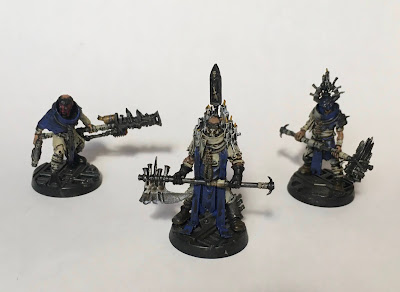 The hammer and axe on these models are two of my favourite bits of miniature design. They both look like they were made from railway spikes - the hammer tieing a dozen together to a handle and the axe looking like they've been forged together and hammered into the blade.
The new ranged models are more about delivering more cool ranged effects. The centre model is the most absurd heavy flamer I've seen in the 40K universe....ever. Who uses a candle to light their igniferous flamer juice? 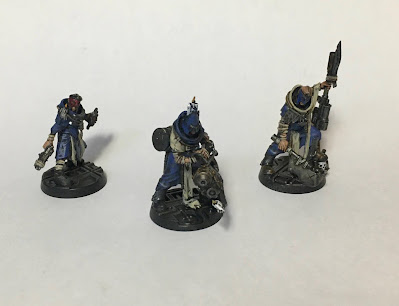 The other two are a bit fun - on the left a simple pistol and a detonator for Cawdor Bomb Rats - he's going to deliver guided firebombs. On the right, a really cool long rifle. That model is going to serve as an overwatch sniper for the gang in the hope that I can focus on delivering the close quarters parts of the crew.
We're planning on some Necromunda on our club day next weekend so I'm hoping to give these a run and set fire to a bunch of unbelievers!
Next Time
Necromunda pics! Blogger Tank has been working on some new terrain for Necromunda and it looks AMAZING. I'll try and grab some pics of it if I'm not playing on it.
Otherwise I'm heading back to 15mm for a bit. I've had some new infantry arrive from Battlefront so will be working on a new Late War Grenadier company for a while. I've started on the new Questoris Knights for the Stupid as well and they're ticking along nicely.