I went on holiday and I have to be honest, sitting in the hot tub while it's snowing was weirdly more appealing that sitting inside and hobbying. Even though I took a whole swag of stuff with me I did almost none of it. So I've been doing more assembly and preparing things over the last week including working through the initial prep of some more 15mm greatcoated Germans as the first shipment of 3 has arrived from Battlefront.

Apocalypse
It turns out that 2 knights isn't really a legal detachment in Apocalypse so I bought some more knights. Mistakes were made. 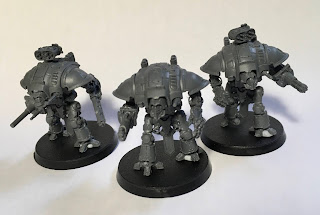 The Questoris Knights look quite different and are distinctly shorter than the Cerastus Knights. But I really like them and they'll look cool towering over all my Khornate infantry.

40K Grey Knights
Blogger Scotty hooked me up with this Strike Squad a while back and I've been getting around to it's assembly for ages. Boy oh boy did I enjoy this! They're crazy dynamic, well posed and brilliantly varied. I'm SORELY tempted to do more.

I've got a Rhino lying about someplace as well which think I'll use for these guys too. We've been talking about some 500 point 40K to get started with 9e and that should be a good motivation.

Next Time
Good question. Some WIP photos I think of some other bits and bobs I'm working on. I'm definitely in a make mode rather than a paint mode at the moment. I might even manage an actual sensible game report from next week's club day if I remember to take enough photos!
Posted by McZermof at 17:31