A miscellany of weekend stuff

I finished the Strike Squad! YAY ME! I loved doing these guys - they're one of the most fun kits to assemble and paint - there's so much variation. Is it the best? No, not at all. It has a dude with a Warding Stave in it. But it looks cool and that makes me happy.

I'm not super happy with some of the right-hand shoulderpads - the white isn't as smooth as I would like and the lines between the red and white are a bit wobbly. My freehand hasn't ever been amazing so they might need another go. But for the moment, I've finished up a cool little GK detachment which will run onto the park with my Guard at some point in 2021.

I did get started on some 15mm after last week's FoW with some very old artillery: 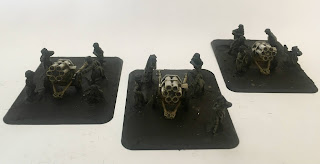 I started with these Nebelwerfers since there are only 3 of them although still loads of crew. I tidied up the Nebs themselves first and dropped a bit of whitewash over the top. The basecoats on the crew are done but quite a lot more to do yet!

Played a great scenario with Pooch and Tank yesterday which reminded me what a neat little game it is. Got to take my new Congregation crew for a run using my old Malifaux figures and it was a hoot. Flying a Congregation vessel onto a third floor balcony, only to have her absolutely smashed by a couple of defending army dudes was a real moment. Stay tuned for some photos and narrative from Pooch. 11/10, would play again!

I'll be aiming to finish up the Nebelwerfers this week and probably get started on the 4 PaK40s that are next in the Grenadier queue. I've got some RSOs mit PaK40 that need some greatcoats added to their crewmen and then they'll be able to join the beginnings of the Grenadiers.