The first test was definitely a fail within acceptable parameters.

Final test games for our end of year event were the order of the day and I took just enough photos of my game with Pelarel to manage a fairly coherent battle report of our game of Rearguard! Pel's Crusader company, with motor rifles and 25pdrs attacked my Engineers.

I deployed Genio on both objectives, mortars central, Semovente 47s on my left flank and L6s on my hard right, with M14s in ambush and minefields in front of my positions.

Pel massed his troops on my right and attacked towards the minefields, with a view to dropping his motor rifle platoon in there to lift the mines. Over the course of a couple of turns, the motor rifles tried and failed to lift the mines and the Crusaders dueled with the M14s who arrived from ambush and the Semovente 47s.

My L6s finally whipped across the middle, trying to take out the carriers (and boy did that go well, but their craftiness meant they survived incoming fire from Crusaders and Carriers. I was....surprised. 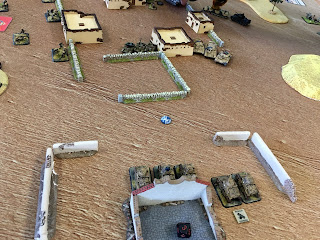 It was about here that the game turned. The motor rifles were pinned, holed up in a building and were protecting the Crusaders from an aggressive shove by my Genio so I assaulted. Here's the result: 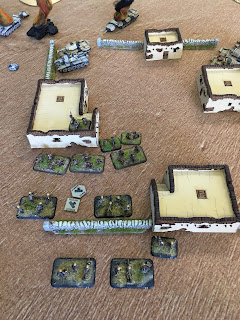 Pel's defensive fire was epic (5 hits out of 6 to push me back) and it killed the flamethrower and two rifle teams. The following turn the platoon, excepting the Brixias, was swept away.

I realised the L6s were probably my best bet remaining, having got 2 Crusader platoons off the park, and having had two solid attempts at removing the Carriers and failed, they went down in a screaming heap leaving the Carriers to give my mortars a shellacking (which they deserved, having counter-batteried Pel's 25pdrs out of the game!!)  before rolling in to end the match.

The game ended when I promptly failed the last stand check for the M14s, the last remaining Brixia mortar and the two surviving mortar teams leaving Pel on the Objective. So my Genio fell at the last hurdle on this one, though not for want of trying.

The second test was a fail well and truly outside acceptable parameters. I played a second game against Tank and realised very quickly that there was simply no way I could win. My AT6 Italian armour was simply hopelessly outclassed by his Grants. I realised I'm going to have to overhaul the list and either work in some Semovente 75s or some 25pdrs because AT6 really just wasn't up to it.

The list has one fundamental problem. Genio are 15 points for a full platoon. At 60 points, they're just too expensive to have all the support I think I need and the split in a 60/40 really just hasn't worked well. So rethink time.

So having given up we played Gaslands instead. I took zero pictures of our race because we were having SO MUCH FUN. On the plus side, one car made it to gate three before we were almost all dead. As it was, all the cars bar one - mine who wiped out in the second turn trying to go faster and was hopelessly left behind - could pootle to the end. So next club day we're going to....try and play it properly. *gasp*

Painted goodies and some workbench updates for sure. I haven't really been that inclined to do much painting this week just gone but I'm definitely getting close to finishing a bunch of things to I should really just crack on and finish them.