In the words of Organiser Gav - now that Auckland has done it's detention and written out it's lines, us Wellington nerds could all go north to play FlamesCon 2020. Five rounds, 80 points, LW. It was nice to be able to get away with the lads for the weekend, hang out, talk a lot of bullhonky and just catch up.

I'm not going to do a full run through of all the games, partly due my appalling camera work - most of my photos were blurry. Vexing. I'm taking a proper camera with one of those derpy bendy tripod things next time but here's the quick rundown.

Al - British Rifles in Dust Up. This wound up being a really quick game in which I learned Flames of War is an easy game if you roll 5s.

I wound up throwing all my StuGs through the centre into the British Rifle platoon on the near objective and tried for several turns at absurdly close range to destroy the one PIAT so I could assault. When the Churchill Crocs arrived and threatened my reserves, I threw in the insane assault. Four StuGs then proceeded to roll over an entire British Rifle Platoon, bouncing ALL the PIAT hits off the Schurzen and passing all the 5+ counterattack rolls to remove the whole platoon. It was insane and both of us were a bit stunned by the result.

Rob - Brit Paras in No Retreat. I haven't played Rob in forever. Maybe FoW v2 at a Panzerschreck many many moons ago. He's great fun to play and a really good player (reflected in his final victory of the whole event!)

Honestly, I played this one wrong I think and Rob played it right. :) He defended and minefielded off the forward objective. I decided to push hard on the rear one having entirely forgotten that ANYONE can remove minefields. It meant that I tried to preserve my armour for a push down the right flank and while I managed to remove most of Rob's AT, I couldn't get close enough to the objective on the turn I needed to to keep the game moving.

Cameron - Shermans in Counterattack. I think this was my favourite game of the weekend. Cameron's a really nice bloke to play and a good player to boot. He basically walled off one of the avenues across the table with his Armoured Rifle Platoon so I had to go the other way, right into an ambush from these dudes: 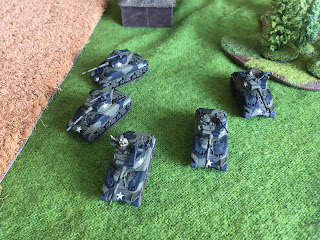 His 76mm Sherman ambush wasn't as successful as he would have liked but we basically bogged down in a slap fight which I eventually lost getting savaged by a hunting pack of 5 bazooka teams from the ARP. Pumas did work getting 76mm Shermans on the flank but otherwise, the highlight of the game was this: 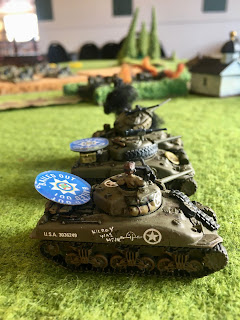 Check out that detailing! Supremely nice work. Really impressed. It was a really nice game to finish day one and a good opportunity afterwards to have a really good yarn.

Wayne - Panzer IVs in Counterattack. Wayne's always a pleasure to play. This was an interesting game too - Heer Mark IVs vs F J StuGs. There's more of him than me, but my tanks are mostly better. It was a quick game as my attacking StuGs bogged down in a slap flight with Wayne's attacking Mark IVs and his reserves got shot in the rear by my reserves. His 88s got done over by my Pumas (!) but in the end the FA 7 on the StuGs beat back the extra Panzer IVs to take the win.

Brent - Panzergrenadiers in Contact. This was one of those games where the result really belied that I had to really work for it. Brent's army was really cool with some awesome choices and it's a list I think I'd really enjoy playing too. I basically had to win this game before Brent's Panthers came on from Reserve and when I hadn't, I really had to rely on them arriving in the wrong corner, which they duly did. Brent's dice really let him down, especially his PaK40 ambush. Mine did not, especially in the final assault to push armoured mortars and a Panzergrenadier platoon off the objective.

All in all, five great games with five great dudes. Thoroughly enjoyable. Also, mad props to John and Gav for putting on a great event and especially to John in making sure that none of the Wellington nerds played each other in any games. That sort of effort from your TO is really appreciated. Entirely unexpected but really really awesome. Also the coconut slice. That too was awesome.

It's always nice to catch up with the Auckland lads, especially given that Panzerschreck didn't happen this year. We also got taken to Saltwater Burger Bar in Onehunga by one of our old nerd friends now resident in Auckland. Yowzers. One of the best burgers I have ever had. 11/10, would go again.

Back to the brushes I think. I've got a few bits and bobs primed at the moment to work on so will be cracking on with them.