I assume that sweet thumbnails in your blog previews are something that attracts traffic so this one is sure to attract no one. Ever. 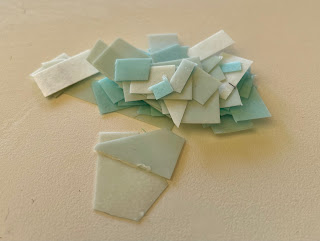 I have been sticking waterslides on things. I might also be the first gamer to ever need to buy a *second* bottle of MicroSol as I dumped mine in my lap in the middle of setting a couple of slightly convex ones. Not impressed.

So did I actually do anything useful? YES! 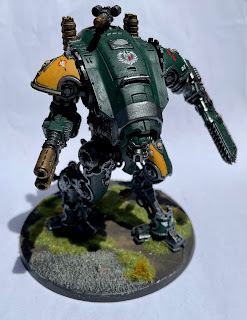 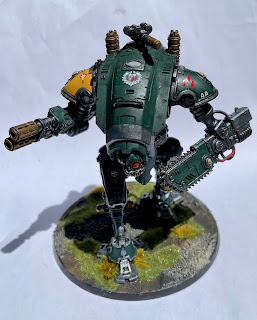 I finished painting a pair of Knight Armigers I picked up in January (and models that I have been jonesing for since they came out.) It took me a while to find a knight house that is sufficiently different from the screeds of red and black I've been painting for the past couple of years in the 40K space and the forest green of House Cadmus was the one that I settled on. Pretty happy with how they've come out, especially the yellow panels which were a bit of a challenge to get right.

So I'll need to add one more Knight to complete the attachment which, because it's me, will almost certainly be based on the Epic classic Knight Errant - powerfist and thermal cannon - and I'm not too terrified of painting more big yellow panels either.

The astute among you will realise that that much waterslide backing can't just be for a pair of Knight Armigers and you, astute people, are correct. Today was a day long heralded as the 'transferrening' as I was preparing a number of things for a game next week. You'll get to see that project as part of a batrep once bloggers Pooch, Tank and I have played the game. Otherwise, I think I might do a bit of a 2020 retrospective and get to thinking about what's on the blocks for 2021.