I went in for a bit of minor surgery at the beginning of the week (a day admittance that ended up being a moderately unpleasant overnight stay but all on the mend now) the upshot of which has me signed off work for a couple of weeks - oh the humanity!!

I must admit, I do wonder how those who have less all-consuming hobbies manage to stay sane when faced with two weeks forced inactivity. Luckily, by Wednesday I was able to concentrate for more than 15 minutes at a time so broke out the paints. Yay!

one of the benefits of being a magpie is there is never a shortage of models on the painting queue, it's just a question of where to start....

First off was some AWI minis that Prinny had pushed my way a couple of months ago - A battalion of Colonial infantry - 4th New Jersey to be precise. I had been passed a partial box of the Perry plastic AWI figs so some assembly required. These weren't too hard but the lack of variety in the poses was pretty dull. I'm really coming to the conclusion that massed rank infantry style games are probably not my thing - I really can't face painting a load of identically posed models :(.

anyway, a primer coat later I was away. The breeches and waistcoats of the New Jersey are white according to the handy painting guide that the Perrys include so I thought I'd go with the time honoured basecoat, magic wash and highlight. the photo below is the point at which I stopped as I wasn't sure it was working too well. The facings on the jackets will be a cream/buff colour so I really have to bring the white up to 'white' of they'll lose the contrast. 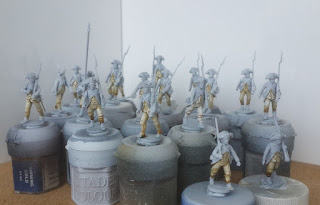 You can see on a couple where I've taken the colour up to white and it actually seems to be going in the right direction. Next week will hopefully see these guys finished and stuck on the bases then I can get onto the second battalion that Che sent my way....

When I took a rest from the AWI I moved on to the ever growing line of Infinity models I have primed but unpainted. A couple of days work has seen 6 new additions to my Japanese Sectorial army: 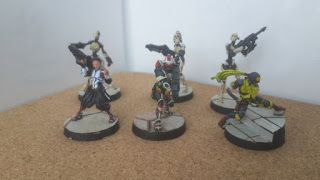 From right to left: the neon lass with the sword adds a ninja hacker to my army, the Domaru Butai has been partially painted for quite a while so now he can bring his fully homicidal berserk rage to the table in glorious technicolour and, to add a bit of extra punch to my grunts, a keisotsu with a missile launcher. For the eagle eyed among you, he is posed pointing his index finger in a gun like fashion, not any other single fingered gesture.. 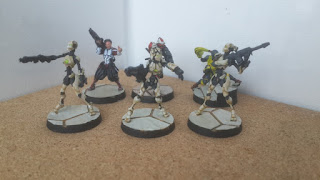 The front rank here is a unit of Karakuri Special Project - a linked team of robot infantry.

A quiet couple of days away from the painting table now but back to it next week with hopefully at least one finished battalion of AWI infantry and maybe a painted Ninja Sniper sneaking in there somewhere too.....