So Cawdor Bomb Rats are a thing...


Tank and I played our first proper game of Necromunda yesterday in which we had an actual scenario and played the game largely as intended. Oh man was it hilarious. So without further ado....

A Cawdor gang, for reasons that they were not at liberty to disclose, has been paid to attack a Manufactorum currently held by the Delaque. With every man-jack of them carrying a bandolier of explosives, they are to set three bombs in the manufactorum and preferably kill or maim as many of the Delaque defenders as possible.

10 Cawdor gangers arrived in the Manufactorum to find half a dozen Delaques waiting for them. There were at least a couple more out there someplace, but they'd turn up, no doubt. The attack began with a wild frag crossbow bolt shot off into the dark.
The Delaques came from cover to counter attack the incoming Cawdor lunatics - especially the leader using his grapnel to zip rapidly across the Manufactorum.
But the Cawdors used their superior numbers to advance rapidly on both flanks!

One Cawdor ganger snuck up the middle of the board and let a rat with a frag bomb off into the Delaque ranks. 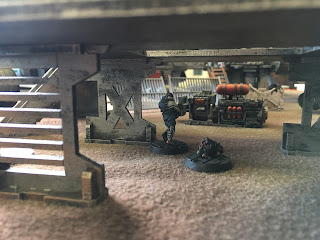 The following turn, I got my shot of the game! The Cawdor champion fired a frag crossbow bolt at the Delaque leader, knocking him off a third story tower when he plummeted to the ground and pancaked. Hard. I realised after he'd hit the ground I could have left a bomb rat nearby for him to fall on. Just in case! 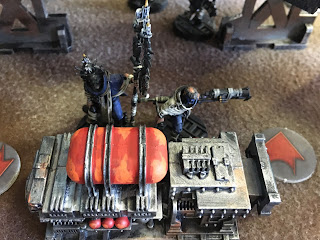 I forgot to take a photo here, but the first Delaque reserve arrived. A Champion with a grav gun. Who promptly crushed the two Cawdors attacking up that flank. Actually crushed. Flat. So much for that bomb.

The bomb failed to detonate (!) and the Delaque ganger escaped unscathed! Mercifully, some wild shooting from a Cawdor Juve got him to hit the deck.

A couple of turns later, the Cawdor ganger on the right flank let rip with another bomb and this time, the petrol can exploded showering the Delaque ganger in flames unpleasantness. This was the point where we realised we'd been playing Blaze incorrectly and discovered it's MUCH MUCH worse than we thought. Or better. It's better if you're the one who is making the fire. Which when you're Cawdor is almost always you. :)
About this point, the Cawdor right rear rear flank was compromised by another Delaque reserve but the Cawdor ganger responded well:
However, the spindly Delaque reserve displayed some astonishing intestinal fortitude and blazed away with his twin stub guns: 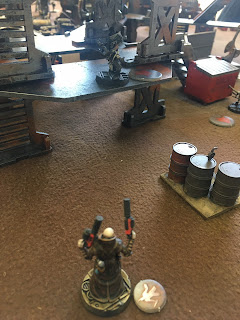 With predictable responses as the Cawdor ganger ducked for cover, lost his footing and fell to the Hive floor! While all this was happening, a lucky Cawdor Juve set a bomb on a donkey well. Which promptly went off blowing that Juve to kingdom come! 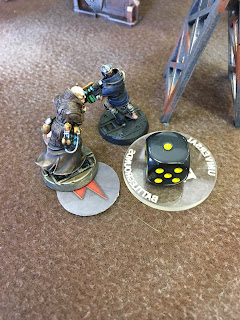 Having crushed the Cawdor left, and then webbed their reinforcement out of action, he fired his Grav Gun into the centre of the board, putting the Cawdor leader and his Juve meatshield out of action. Then he disarmed the bomb. GRRR....

About here was when Tank's gang bottled out and started running leaving me with enough men and enough space to destroy a bunch of machinery in the middle of the board.

The last action shot of the game, as the last standing Cawdor ganger tried his best to gun down the last standing Delaque champion. He got a lot of hits with his autogun and no wounds. And then the Delaque ganger ran away! 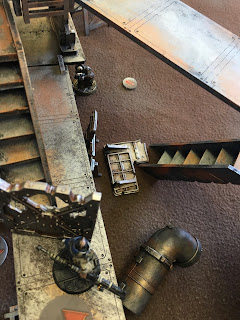 Thoughts?
Loved it. Will probably be doing stupid stuff and getting new Cawdor kit from Forge World. I can't believe that I'd even think about that but that's how much we enjoyed this! I've planned for some more games in about a month when we hopefully also will play our first game of 6mm Apocalypse!

Next Time
Techically next time will be in February, which will probably mean I will do a sneaky and paint my Month 2 6mm silliness the morning before publishing.....