I've finally managed to break out the brushes over the last week or so and, typically, flitted between two projects.  The first was to finish another model in my Infinity starter. With the Domaru Butai and Ninja to choose from I went for the Ninja. 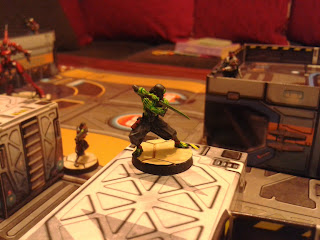 I went for the stock black and green from the CB scheme. Rather than just painting green and highlighting,  I painted the green areas yellow and glazed with green inks.  Looks better in the 'flesh' than on naff camera phone.

The second project was to finish an armoured squadron for my British Infantry company for Panzerschreck- the Palmerson North Flames of War doubles comp Simon and I are entering. 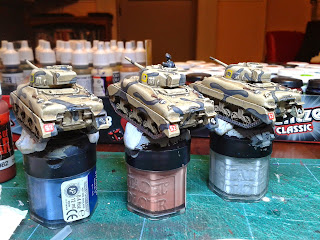 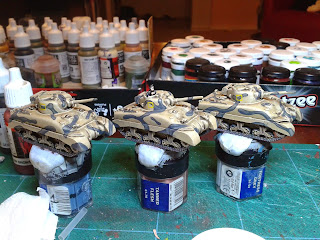 I'm pretty pleased with how these have turned out. The colour scheme is something different for WW2 British tanks and I decided to mark them up asB squadron of the 17th/21st lancers, the "Death or Glory" regiment. Though with my dice rolling it's more likely the former than the latter :-(

However, these guys took 2 attempts before I was really happy with the colours
The base colour was Green Ochre, shaded woth some dark shade wash then drybrushed acouple of times, adding incresing amounts of Iraqui sand tp the green ochre. The camoflage patern was then picked out in german grey and highlighted.  Just have to find those damn turret hatches now....