Forgive the rough photos - the early morning sun gave me an opportunity to take some semi-well lit but they've not come out that well. I really need to get a lightbox for these piccies!

Gaslands
This has been on the list for a while and I finally got off my butt and finished them Below are my Desert Raiders for Gaslands.


The vehicles all have drivers and the cars have co-drivers too (and both of them have AK-47s!) - Zvezda do some 1/72 scale moderns and the arms fit surprisingly well on the Gaslands crew models. The truck cab didn't really want to fit two crew so the co-driver is out the top with a bazooka. That vehicle is heavily overarmed and so I expect will be generally driving slow and blowing stuff up with it's absurd armament.

I really enjoyed this little project and I think I'll do another set at some point. I need to find another semi-coherent set of Hot Wheels that really float my boat. I'd love to do a set of seriously industrial vehicles but they tend to be made smaller than the cars because they'd be dumb big otherwise.

I had a little solo test game where my two Citroens raced each other to the end of my gaming table and back. Gaslands is mechanically quite simple but I suspect would be very interesting with more vehicles and a more complex track. I'm genuinely looking forward to playing a bigger race with the lads.

FOR THE EMPEROR!
Pooch graciously reminded me last weekend that I hadn't painted something to add to one of my 40K armies (according to my 2020 goals), so I hammered through the half finished Priest from Blackstone Fortress to go into my Guard army. I need a priest to give +1A to my Guardsmen when I order them to 'Fix Bayonets' (something I do much much too often!) so he'll be a hoot. 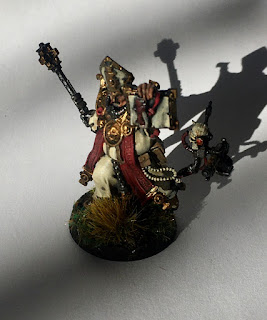 Next Time
Literally no idea. I'm going to be away for a few days so if it's going to be anything impressive, it has to get done in the next couple of days. Seems....unlikely.

But I will be working on a new dimension of the Stupid over the next couple of weeks. Pooch happened to find me a classic Epic Great Unclean One and some Nurglings which means a parallel build of Death Guard and World Eaters is now on the blocks. And I've still got some options for Thousand Suns up my sleeve. And some Slaaneshi daemons. Chaos Undivided here we come?