I fought the claw...

Proud dad joke moment or not. Not sure. Anyway, Bloggers Tank, Pel and I played a game of the new second edition of Frostgrave just to see how it went. It went well for me (apparently rolling high on d20s is my special skill. Great for DnD & Frostgrave, trash for Infinity) and less well for Tank whose dice were really just not on fire.

We played the scenario in which there are five treasures, one of which is a Genie. Each time a treasure is grabbed, we check if it's the genie and if so, it comes out and wreaks merry hell.

All three wizgangs advanced rapidly to the centre of the board - Tank's Summoner leapt one of his warriors onto a treasure and Pel's Chronomancer teleported onto one himself.

The Necromancer's apprentice attempted to stop the leaping soldier but utterly failed. His master, on the other hand, summoned claws of bone to grab the Chronomancer. And then we went into a period of failing to cast a darn thing!

The Chronomancer spent a couple of turns trying unsuccessfully to teleport out of the grip of the claws while his troops and the Summoner's troops got into a massive scrap in the middle of the board. You can see in the photo above a Thug trying to free the Chronomancer by fighting the claws. Let's just say it did not go well for the Thug. 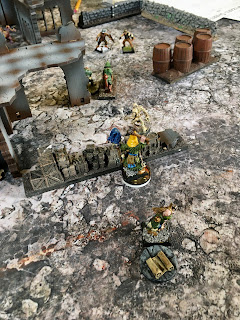 The Summoner summoned an Imp to the battlefield to defend himself and his apprentice but it, and one of his warhounds, were savaged by a couple of Thugs from the Chronomancer's wizgang. Tank's dice at this point were just abominable. There were odd highlights (and at least one natural 20) but they never really came good. 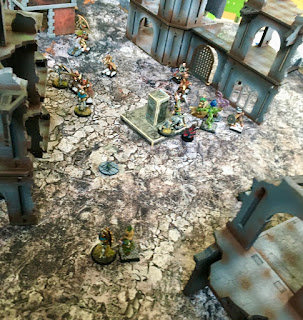 Hilariously, the last treasure to be grabbed, the bottle, contained the genie! The Necromancer's apprentice opened the bottle, the genie appeared, looked around and promptly disintegrated the foolish apprentice to end the game!

So one game in to the new edition and the changes we ran across seemed really good:

We didn't get to being able to do the post game as it was late but my initial read through of the dial-back on monetary rewards seems really nice and, combined with the changes to wizgang structure, seem like it'll be a lot less likely to have one player scream out ahead with more money and advantage.

I finished up the second base of Grimghast Reapers for Kings of War:

This one was a tougher painting effort as the selection of models for this base were a lot slimmer and getting paint onto the interiors wasn't as easy as I would have liked. But I'm happy enough with the outcome and all together they look pretty neat:

Blogger Tank and I also played a game of Necromunda with Blogger Pel at the club - his first outing with his Orlocks. We played the Gang Moot scenario in which our leaders arrived to parlay and then it all kicks off. I didn't take a heap of photos but I loved the posing of these two models. 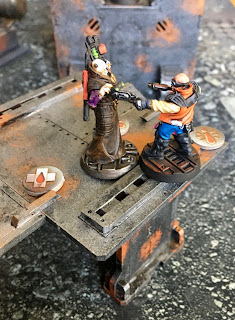 Tank's Delaque ganger charged into Pel's Ganger and backed him up to the edge of the platform. After a couple of rounds of handbags, Pel's ganger happily gunned down the poor Delaque. He did the same thing to my ganger with the big hammer too!

Honestly? No idea. There's loads of half done stuff sitting on my bench at the mo and I'm not really sure what I want to do. It'll be something from the rapidly decreasing pile by my painting desk. I've kind of lined up a Christmas break project but other than that it's all very bitsy.