Roaming through the old world - ep3(ish) 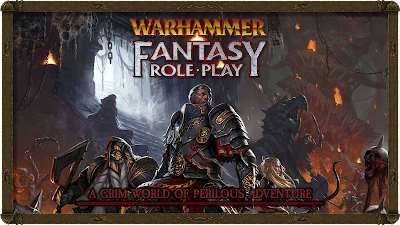 After an exhausting night at the Hooded Man inn, the party glad to be able to make their way onward in the comfort of a Coach. Aaron helps Heinrich manage the horses through the thick muck of the road whilst Cressida watches the road cradling her newly acquired blunderbuss.

Marie and Saskia opt to ride in the "fresh" air on the roof of the coach - much to the other occupants' relief as does Eivor. That left Nynn and Rudiger to accompany the Kurtzmann sisters inside the Coach.

The day's journey was uneventful, the sisters provide some distracting conversation within the coach whilst the occupants of the roof entertained themselves. The coach turned onto the Middenheim/Altdorf road sometime in the mid morning and the coach pushed on to the Coach and Horses Inn, arriving before dusk.

The signs of bustle and activity reassure suspicious minds as the coach enters the gates of the inn and pauses under the archway. 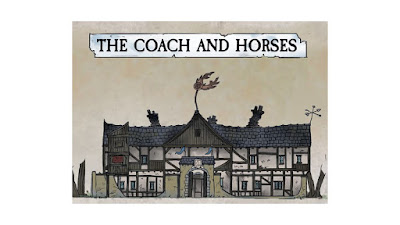 the party de-buss into the bar whilst the coach is led around to the back of the Inn to allow the horses to be stabled.

The warmth and noise of the Inn bar wash over the group, the inn keep is talking loudly to a rather drunk pair of men sat in chairs near the fire.

A very well dressed gentleman casts an appraising eye over the group as they enter. He loses interest in them as they notice him and returns to nursing a large glass of wine whilst propping himself up against the bar. 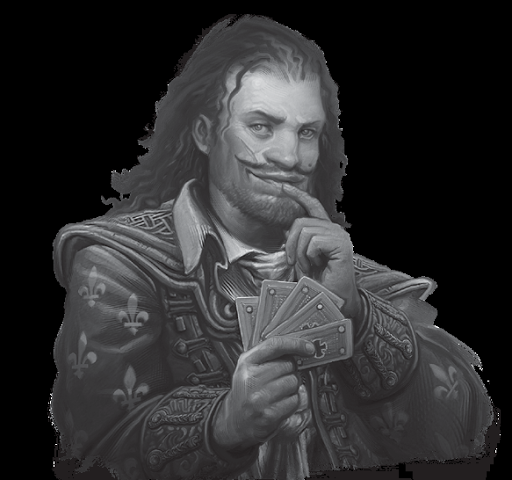 A trio of women sit at a table: an obvious noblewoman picking disdainfully at her food, piercing green eyes briefly raising to the noise of the opening door before returning to the contents of her plate. A small, mousey girl in plain clothes sits sullenly to her right, her clothes shouting her station as servant next to the finery of her mistress. To the lady's left sits a broad shouldered muscular mountain of a woman, blue eyes staring icily at the party as they enter.

At the far end of the bar appears to be a large book propped up on a table, from behind which a hand occasionally reaches round to reach for a tankard.

A tall, lanky barman frowns whilst cleaning glasses behind the bar, muttering to himself under his breath. His focus seems so absorbed in his task he pays no attention to the group of travellers at the threshold.

"wet beds! warm roads! Caaww!!" screeches across the laughter of the coach men as a crow hops along a shelf above the bar, bobbing its head and flapping its wings as it does so,

"Oo, shut yer 'ole Blackie! Don't you mind her sirs and madams, welcome to the Coach and 'Orses" The inn keep, having extricated himself from the coachman bustles over and greets the group. "the name's Gustav Fondleburger, I take it you ladies and gents will be wanting to stay the night?" Baggage is collected by young porters who appear from nowhere and the group are shown to a table with the promise of hot food and good drinks.

The Kurtzen sisters excuse themselves to "clear the dust from the day's travels" and make their way upstairs.

Aaron takes a keen interest in the noble woman whilst the others nurse their drinks and discuss the events of the last couple of days. All agree that something strange is going on and that sticking together for the remainder of their journey to Altdorf would probably be a good idea.

the night is passed in general conversation and drinking. Aaron recognises the lady's family colours as belonging to the Von Strudeldorf family. the young woman is surprised enough at being recognised by such a common ruffian that she briefly lets her guard down and engages in conversation with him. much to the annoyance of her bodyguard.

the well dressed fop at the bar wanders of and introduces himself as Phillipe Descartes, a thick Brettonian accent colouring his otherwise excellent Reikspiel, to which Marie replies in fluent Bretonnian! A friendly game of Scarlet Empress ensues which leaves the purses of some of the party somewhat lighter!

Saskia is persuaded that the horse trough is not the place for a young lady to refresh herself and a copper of hot water is prepared in a bathing shed off the back of the kitchen. Saskia spends some time marvelling at the feeling of hot water before washing herself and all of her clothes - much to the relief of the group when they see her later.

Rudiger and Cressida strike up conversation with the two coachmen by the fire. Gunnar and Hultz are already several sheets to the breeze but are happy to accept more drinks for the chance to gossip and brag. Stories of with hunter burning villages, coaches going missing, increased bandit activity and the Emperor annexing Ubersreik paint a worrying picture of the Empire for both of them.

the evening draws to a close and the bold adventurers retire for the first restful night of sleep in several days.

the following morning the Kurtzman sisters bid farewell over breakfast: Heinrich is taking them on to Middenheim after picking up a second coachman. Of Gunnar and Hultz there is no sign....

Aaron and cressida take it on themselves to ensure that the Altdorf coach is tacked up whilst Rudiger and Eivor chivvy the Coachmen to Breakfast and onto the coach.

It's very soon apparent that if they're going to get anywhere, Gunnar and Hultz will have to sleep it off whilst Aaron and Cressida take the reins.

The pattern is repeated for the next two days  until the morning of the third day sees the coach cresting a hill revealing the splendour of the heart of the Empire before it: Altdorf at last! 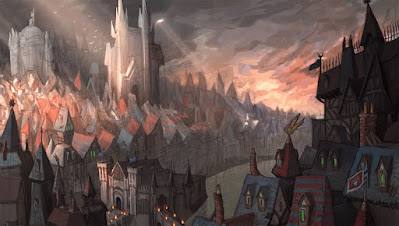