I think I promised this would be a coherent battle report last week. It's going to be something but coherent might be a touch optimistic but I've got some pics and they go in an order. I'll try and put a narrative around them...

Tank and I played the scenario where we had arrived in the same ruined dome, both intent on harvesting the ghast that grew there and selling the mind-altering substance to enhance our respective gangs power. The Cawdor spread across the dome while the Delaque deployed in cover or in infiltration positons.

The first shot of the game came from the Cawdor champion who put a shell from his long rifle square into the chest of the Delaque ganger in the distance. Saved by his armour, the ganger staggered back from the impact, fell two stories and broke his neck. Score one for Cawdor!

The Delaque advanced in force on their right ran into the other Cawdor champion who was on fire. Well, he wasn't, as it turned out but the Delaque gangers were...

The ganger on the right there charged into the Delaque champion, failed to hit meaningfully with a chainglaive (he was unable to cut things while he was already cutting things) and was webbed out of the game for his troubles. About here, Tank played his favourite card from the Delaque deck and all the lights in the dome went out. 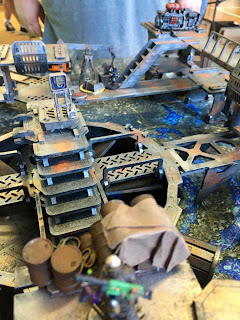 As the Delaque in the foreground gunned down the Cawdor champion with the long rifle (because Delaques like the dark!) the Cawdor ganger in the distance tried to harvest some Ghast from the deposit (yeah, we were subbing in for the recommended Shardwrack Spines). The plant puffed a whole pile of spores into his face and he promptly inhaled deeply instead of... not doing that.

In another of a succession of good dice rolls, I rolled a six on the table of 'what happens when you inhale ghast, voluntarily or otherwise and my ganger shouted to the whole dome that he was the God Emperor himself gaining psychic powers and some serious skills! 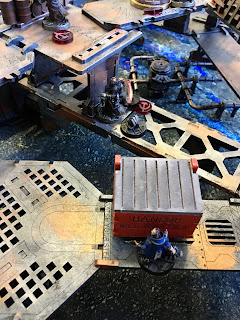 The dark gave me one other advantage. Having snuck through the dense terrain of Tank's gorgeous Necromunda table, I launched a bomb rat at the Delaque leader. Everything went well and while it did no damage, it set the Delaque on fire. On the far side of the board, the champion with the heavy flamer had set everyone over there on fire too!

At this point I forgot to take photos for a turn or two - a Delaque with a long rifle shot the bomb rat launcher off the catwalk and seriously wounded him In revenge, the Cawdor leader hacked him down with a massive axe. My Champion with the long rifle recovered from being shot, tried to harvest some ghast and flubbed it hard. Tank got to activate him for a turn and spent it jumping back and forth across a gap trying to fail and his one run of good dice rolls made sure I still had a Champion at the end of it!

Tank's last ganger finally managed to successfully harvest some Ghast and made a run for it.

Not to be denied, the Emperor, using his new god given powers, gunned down the only ganger in the dome capable of actually harvesting some Ghast in order to steal his little green bag. At that point, Tank's Delaques bottled out leaving the Cawdor gang with a single bag of Ghast and possession of the dome.

I've finished up a couple of solos for the army this week and made a lot of progress on the first unit of Spectres (which just aren't going to get done for publishing today as I haven't quite got the wash dry yet....)

My plan is to keep rewarding myself with the solo models whenever I finish a unit so once the Spectres are done I'm going to wade into the Knight of Shrouds and the Executioner before I hit the second unit of Reapers.

More ghosties, definitely, and I should really be getting on with some of the 40K stuff that's piled on the to-do list. I think I may have possibly failed at my goal to add something to a 40K army every month this year because I've kind of stopped keeping track of that goal...