Easter Friday saw the finale and culmination of all the hard work that one or two people have done over the last couple of months plus the additional helping the rest added in :)


For what seems like forever I have been wanting to put on a game of the size that I see in wargames magazines and on blogs. You know the type: 28mm big battalions, excellent terrain, multiple players. Friday's game did not disappoint. The scenario we ran was one of Rick Priestly's that appeared in a Wargames Illustrated a wee while ago and saw the American force arrayed on the southern side of Birmingham Hill trying to race into position before Cornwallis' force got their. The Americans role was to prevent the British taking the hill and therefore cutting off the rest of the American army's line of retreat.

The British was led by myself (Cornwallis, the Grenadiers and 3 Brigade), with Mr Goldstone (4 Brigade), Poochie (Light Brigade), Pelarel (Hessian Grenadiers) and Mr Briant (Guards) while the American's were led by Tibby (as Washington) and each of Mr Bailey, McZermof, Scotty, Tank Engine, Mr Steer and Prinnie had a brigade of rebels.

The game started well. I ordered the Grenadiers up to the fenceline just north of Birmingham hill but rolled a double '6'! A blunder! the Grenadiers marched to the right instead. In fact that was about the run of it for the British under my command. I rolled five blunders throughout the game. There were five in total on both sides! My first five dice rolls were 12, 11, 5, 12, 12. 3 Brigade came on in turn three then promptly retired one move.

The same issues happened on the other side with Tank Engine and McZermofs brigades doing a whole lot of nothing except when the Guards smashed into McZermofs Marylanders and broke the brigade. On the other flank however, Tibby's sole 3rd Virginia Regiment held off the Light Brigade over several turns, ultimately breaking the Lights after Tibby rolled 18 4+ die rolls straight and Poochie did not.

Ultimately the British ran out of steam and the high watermark of the advance was 4 brigade gaining the hill crest with one battalion of Grenadiers in support, only to see the rest of the British and Hessian brigades streaming back to whence they came. A solid win to the freedom loving patriots. 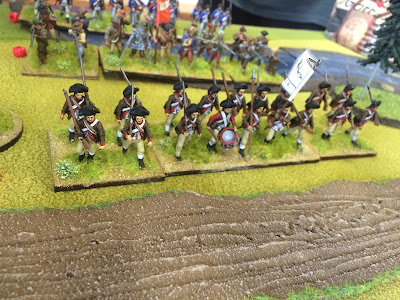 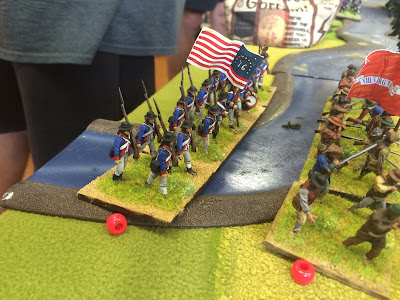 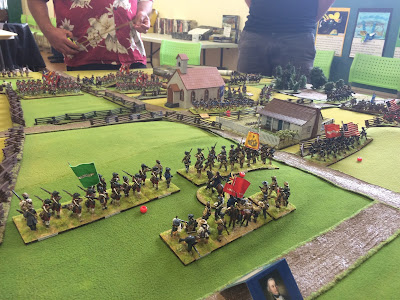 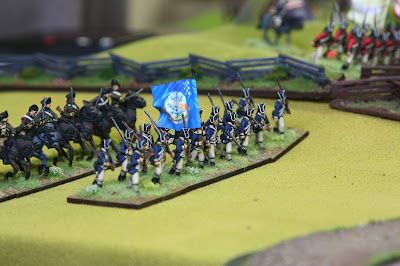 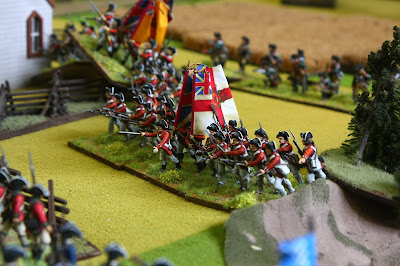 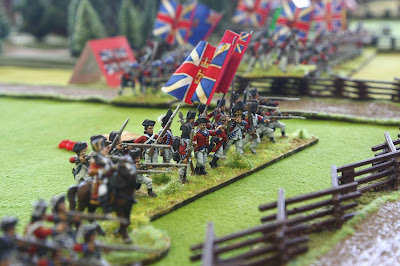 The red and green markers you see in the pics are the markers we used to record First Fire and Steady rules for those units that had them. I had also made some custom disorder markers for the game too, which I did not grab a pic of. As it happened, I forgot to take any pictures at all! All pics above are courtesy of Mr Steer (http://rdsteer.blogspot.co.nz/).


So that was Friday. Lots of people making lots of noise and rolling bad dice and annoying the serious gamers playing DBMM. Annoyingly, as it was Easter the pie shop was not open. Murder was almost committed but for a quick trip in the car towards Upper Hutt city where a lone champion of justice and good pastry was still open and doing a frickin' good trade!


Saturday dawned, and minus a few of the team whose brownie points had been loooong spent, we set up for another game. This time Mr Bailey, Mr Goldstone & Son, new boy Adrian and myself played the AWI scenario straight out of the Blackpowder rulebook. This time I took some photos!


The scenario pitted 'Gentleman' John Bourgoyne against some dirty revolutionaries lead by the completely trustworthy Benedict Arnold. The British, again commanded by me, having been ambushed by some minutemen, turned to face an onrush of continental regiments, Adrian helped the British push for victory over Bailey, Goldstone & Son. The British won the game, but lost one whole brigade and the surviving two brigades were in a terrible state.

6mm moderns has been a long time project for not only myself but quite a few members of the Regiment. We have collected painted and created for a number of years with no real game to play. We made forays into Cold War Commander but it just didn't take off. So along comes Team Yankee from Battlefront. A number of the Regiment used to playtest for BF back in the day and there has been many a discussion around how well the Flames of War (and its derivatives) would translate into 6mm. So now we have the opportunity. The new Team Yankee range of models are gorgeous but even if we had the cash to purchase whole new armies, down here in our South Seas paradise we can't get hold of any BF product for love nor money - so 6mm it is! 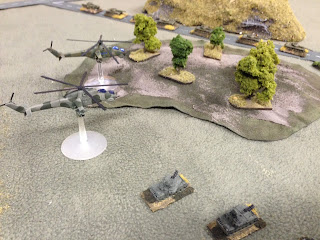 Having most of the models for both an American force and a Soviet force I had not much left, but to build a table. 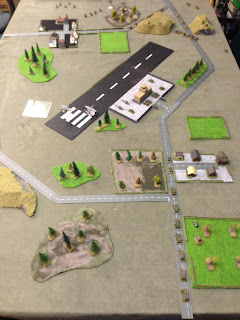 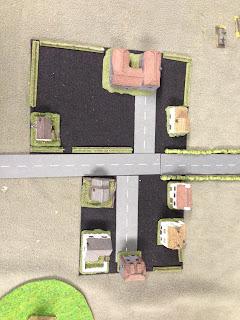 So I rustled around the bits draw and made some trees and some hedges. I already had enough 6mm buildings and fences (from a second hand purchase Pelarel and I picked up a few years ago) to make 2 small villages, but I needed a centre piece - so I created an airport. I found a great Terminal building from Gamecraft Minis and a club mate provided the rubber packing material I used for the runway. 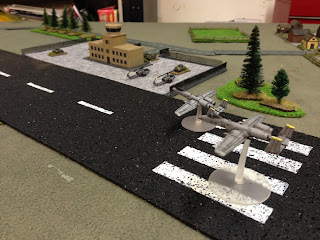 I found some security fencing to block off the car park and a few pieces of felt later and we have the makings of a cool little table. 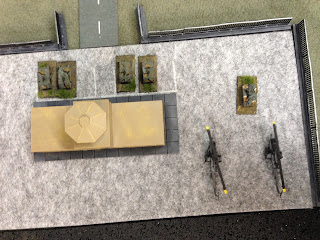 The roads are temporary until my order from Hotzmatz arrives to replace them. 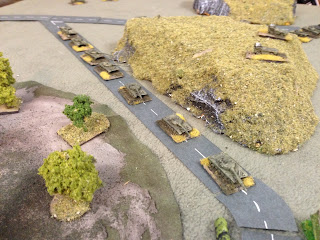 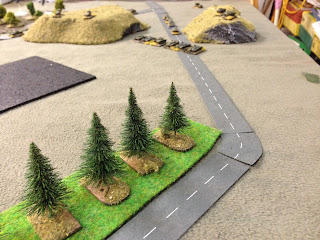 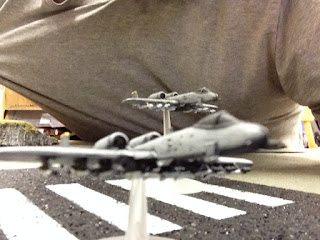 Ignoring the fact that this is so late that it is now halfway through March, I did manage to get some painting done in February.

I spent most of the month painting 15mm Redcoats, some Normans and hiding from my commitment to paint AWI Light Infantry for the big game at easter!

I got so sick of bright colours that I needed a change, and so the only thing which I actually managed to get fully done in February is a platoon of 15mm Vietnam era ANZACs with support options. The miniatures are from Flashpoint Miniatures, and are... ok in terms of quality. Not the best (I prefer the Battlefront ones), but that said, there are some really nice sculpts in the mix too.

I based them up for Force on Force gaming (based on seeing McBeth was keen on some FoF gaming sometime this year), and really only painted them as a way to distract myself from the large amount of red and white which I needed to be painting on the British. It was so satisfying to paint some green instead!

So the ANZAC force is made up of a Platoon HQ, 3 Squads of 10 including an M60 team, an 81mm mortar, a sniper team, a scout dog team and a 4 man SAS patrol (with converted berets!)

Well, that is it for February, I can promise a whole lot of Red next month!

My recent focus has been to finish off my regiments for McBeth's birthday Bash. With Them out of the way I could begin to add the polish to my Hungarians for Bolt Action and I thought I would show where I have got to..... so with delay

As you can see Hungarians have access to plenty of left over German support weapons and can also borrow armour though it can only be regular and it not all the big cats. I have a StUG III all painted up as well just in case I get the opportunity but to honest I am enjoying the Hungarian stuff.

Now the next event for me is V3 at the end of May, I am dipping my toes into Impetus, or being dragging along by the rest of the Regiment, read into it what you will so I decided to go...... Ottoman Turks which means really I am going Hungarians again yah!

A little bit to do but I am enjoying the challenge!


Plenty of updates to come, and very much looking forward to McBeth's Birthday Bash at Easter

For Mr Bailey: A Muse

We are getting very close to our Easter AWI battle and the painting and basing is cracking on at a good pace.

Mr Bailey, however, is stuck in a rut. Well, really he would be rather painting his new 28mm WW2 minis he has just received for Bolt Action! He needed some inspiration to get back on the horse (and musket) so I took a few snaps of the units I completed last night. 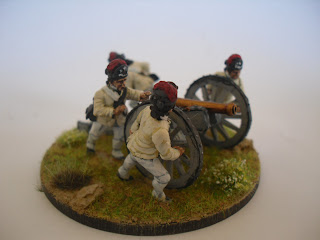 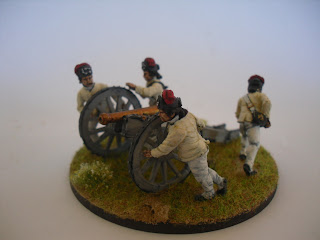 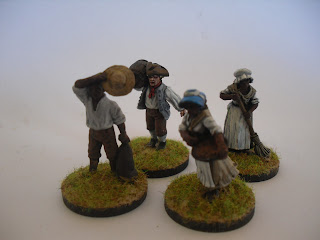 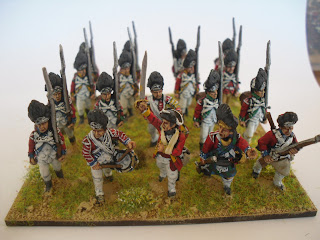 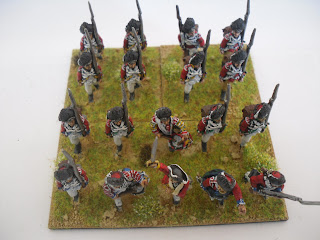 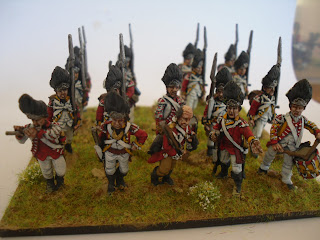 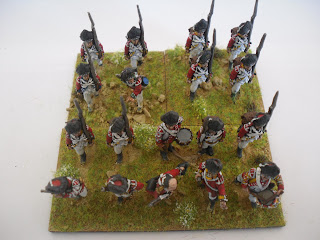 Enjoy, Mr Bailey and use this muse to its fullest extent!
Posted by McBeth at 19:32 4 comments: