Earlier this year, a few of the locals started talking about the impending release of 8th edition Warhammer 40K over top of a game of Shadow War I played with dirty Harlequin player Pelarel. They were all very positive. I'll freely admit to being more than a little shocked. I watched some battle reports and read some forum posts and, well, went all in with Pooch, Scotty and Tank. Delightfully, we've also drawn McBeth and Pelarel into the net of GW!

I finally played a game last weekend. It was my first game of 40K since I gave it up at the end of 2nd Edition and I can't even remember when that was. Some time in the late 90s. So 20 years (ZOMG, I have been doing this for that long....!) ago, I last fired a boltgun in anger. And it was glorious. The game is simple, mechanically, but there is plenty of complexity and a surprising amount of depth. There was a lot of complaining on all sides about various delightfully broken things but the game looked good and was a lot of fun.

Scotty, Tank, Pooch and I played a four-player game so that we could get a feel for the rules. Scotty's Imperial Bananas Fists and my Deathwatch against Tank's Tyranids and Pooch's Death Guard. The result was....a win to the bad guys, but there was half a Dreadnought, half a squad of Terminators left at the end of the game. 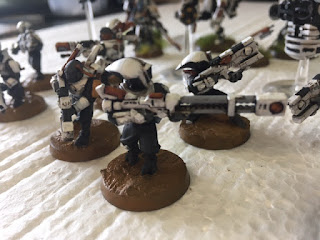 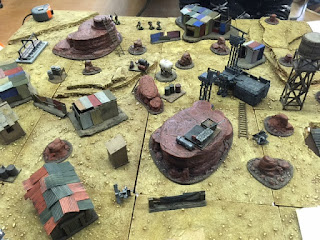 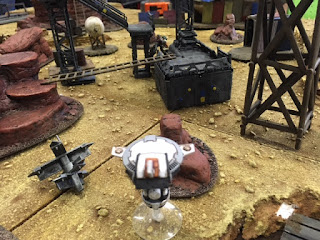 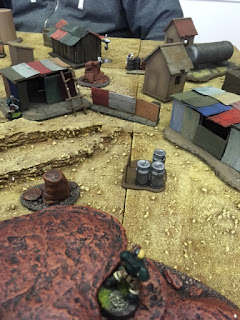 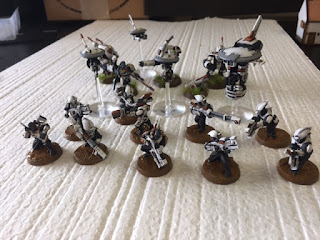 So over the weekend the Regiment got together to play some 6mm Team Yankee.

The scenario was (pretty) simple, the Soviets had to smash through the NATO defenses, capturing the strategic objectives, towns and the airport. NATO had to hold on long enough for their reserves to arrive and turn the tide!

The Soviet attack was launched at night, which actually caused no end of trouble for both sides.

As for how the game progressed? I will let the Soviet aerial photography tell the tale (with big thanks to Richard for taking the snaps!)

And as for the Soviet left? Well... it was much the same story.

It ended up a victory for NATO forces, the blocking forces were able to stall the Soviet advance long enough so that the M1s, Leopard IIs and Chieftans coming on from reserve were able to mop up the rest.

All in all, the game flowed well. We don't know the rules to Team Yankee very well, and so spent more time looking at rulebooks than we (as a group) like. And there was some definite "but it's like this in V4" happening too.

We used cm for all measurements, except for deployment. I think there would be an advantage to mixing/matching even more- the artillery range comes to mind especially. It's a bit odd to have a 2S1, with a range of 15.3km (according to Wiki) not able to hit things....

And I think we would reduce the size of the armies by 25%, the Soviet forces were probably too much of a parking lot.... (which made the artillery being out of range even more painful for me!)

Massive thanks to Pelarel for doing all of the organising, terrain planning, making, cat herding and other tasks!