I have joined the ranks of Team Chicken! Pooch got there first, but he hasn't posted his ranking entry in Team Chicken yet. You might see it in a couple of days. In the meantime, I've painted a couple of Cadian Armoured Sentinels for Scotty's narrative campaign. I think that's the army mostly finished bar one more squad to complete and a new Ordo Malleus Inquisitor.

I'm keen to have one more, since a squadron of three seems most correct. It'll probably have another long arm because I love the asymmetry of it, although I am oddly tempted to put a missile launcher on it because the Sentinel missile launcher looks cool.

The question I'm now asking myself is should I buy six more and have a Sentinel Squadron? Is that a bad idea? It's probably a bad idea...

Next Time
Maybe the last of the stuff for Scotty's campaign or a couple of other little doodads that are currently on the painting table as that last part might take a few days. And it's only five more weeks till I hit the 12 month blogging mark and I'm going to need something special for that. I've got an inkling what that might be now but I'm not telling!
Posted by McZermof at 16:15 No comments:

Con-crud and actually some finishing touches.

So I basically forgot to take any real photos because we had 5 really good games against 10 really good dudes all of which could have gone either way. I snapped a couple of quick in game ones though just for the laughs: 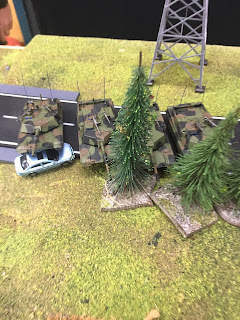 Fellow blogger Pooch's IPM1s crushing the traffic on their way to crushing out M60A1s. This does not count as concealing terrain and no, no cross tests were required. 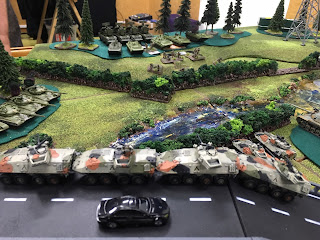 A LAV broadside. This is in game, as Tank duelled successfully with the T64s on the left of the shot, I broadsided the BMP2s in the forest on the hill with 8 LAVs. I *hate* BMP2s.

If you do want to see some really nice photos of all the armies that were there, check out the TY Facebook group.

For a few details (for our few readers who weren't actually there!) the weekend was doubles event, 140 points, one set of support on 8x4 tables. Tank and I played double-Marine M60s and LAVs and went 2-1-2 for the weekend. We *could* have won all three of the games we didn't, which was nice. We also got a lot of compliments about bringing the Spooky for air support. It would have been nicer to have had it *be* an AC-130 rather than Harriers, which were disappointing (mostly because Tank and I fail HARD at 5+ firepower rolls.)

There was a lot more NATO than I think either of us was expecting - TY (especially in 15mm) hasn't been capable of supporting a comp like this for that long in NZ and, as Pooch pointed out, 140 allows those high-end NATO tanks and I think a lot of people took that opportunity. Not us. We do things the hard way. We'll both be glad when TY2 comes out as the Starting Step order and morale rules made a huge mess of a bunch of us over the weekend. Three tank platoons....ouch.

We laughed a lot and none of the games were a complete blowout even though we screwed some things up with half on / half off choices and deployment choices - in fact, the majority of the games over the weekend were 4-3 or 3-3 draws. As always with this weekend, the food was excellent, the beer was good and a fortunate acquisition of good coffee saved us from morning misery.

I finished my Heavy Platoon this week as well and did a bit of assembly to get some stuff done for next week. I did wind up looking at some box art and realising I've left the gun shields off all my lascannons. And y'know what? I'm okay with that. 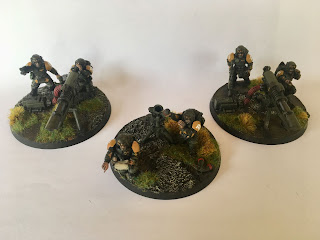 Next time
We're starting a 1000 point narrative campaign in August and I need to finish a bunch of things for that. So it might be that stuff. I'm also working on some little terrain projects and starting to assemble and rebase my Teutons for KoW. Oh, and I've got some sabot bases to use my Warmachine army for KoW in the meantime, so there's a serious glue-up and basing exercise there to come.

I'm also bearing down on a whole year of blogging every week so there'll need to be some kind of exciting post for the anniversary.

Posted by McZermof at 16:48 No comments:

Finishing touches? Not so much.

And while this goes up on Sunday, I'm writing it Friday since I'll be playing Team Yankee all weekend!

I have actually done some stuff this week but it hasn't been all that productive. 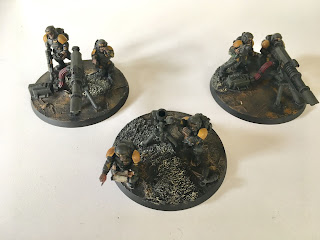 My heavy platoon is a perfect example of doing it wrong. I should be fielding many many mortars. But that's lame. And I love the Cadian lascannons. So MOAR LASCANNONS! It was a tough call not to roll out more autocannons but I have a plan for that.

I've also sorted out the nose instrumentation of my Valkyrie thanks to a busted up Chimera comms array I found in my bits box. It just sort of completes the model. 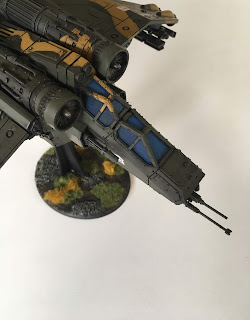 I did the base as well, which I hadn't done. On Pooch's advice, I've painted the stand black and I think I like it better than clear.

Bonus Inquisitor!
I was doing a bit of repair work on this guy after he was attacked by a large ginger daemon that lives in my house and I realised I'd never posted him up here. 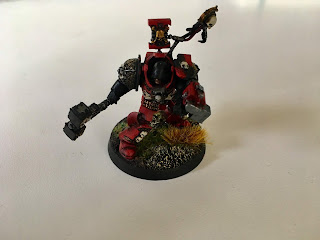 This was my first Inquisitor that I cobbled together out of a Grey Knight Paladin and some bits from the Deathwatch upgrade sprue. The hooded head just really makes it look awesome. Also, plain old humans in Terminator armour are REALLY bad. So I'm going to build another one. I think the next one will be swinging the hammer in both hands. Then I can field a detachment of Inquisitors with Hammers. And that will be cool.

Next time
I'll finish up the heavy platoon and put together a quick write up of the TY event with some photos. There look to be some interesting armies coming for it so I'll try and take some decent pics.
Posted by McZermof at 19:00 No comments:

I feel like that's a post title I've used before. And, not to put too fine a point on it, it's one I'll likely use again...

I've finished the Valkyrie. Including the door gunners. Who made me use some VERY bad words. Repeatedly. But they look cool so it's fine. 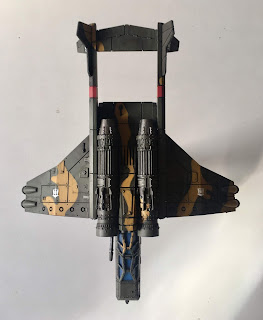 Top down you can see the tiger stripe camo. I figure the underside should be blue-grey (and it is) and the topside should have the same vehicle camo as the rest of my army, given that it's a transport and ground attack aircraft and will be seen from the top! 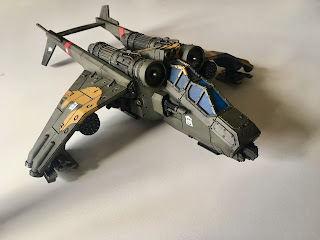 Front on she looks pretty sweet, including the armament. Multilaser. Hells yeah. I was slightly vexed that the normally seethrough canopy had ben painted but actually it looks pretty cool. The nose is missing some instrumentation (can't be helped with internet buys sometimes) but I'll pick those up sometime soon and fix them on the front. 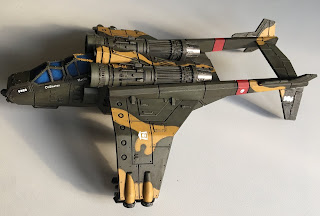 Port side you can see the kill markings (pre-placed optimism!) and a couple of nicknames for the pilot and gunner. Seemed rude not to have those there. Mortis is easy but Ordinatus? It's from the Latin 'to direct' so I'm reading it as 'Deadeye' because I can. 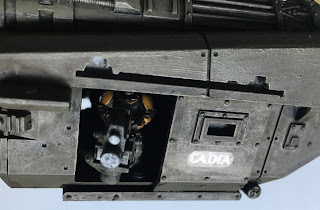 The wings are magnetised so you can see the door gunners! They fill the door wells quite successfully and I wish I'd actually been able to fill the interior with actual troopers. It would look super cool.

Next time
I'm working through the heavy platoon at the moment and when that's done, the Cadian infantry platoon will be finished. I've got some Sentinels and a Leman Russ to do (and I might get a second) and a platoon of Scions half built. Most of the bloggers are at a Team Yankee event next weekend so there'll definitely be something from there too.
Posted by McZermof at 14:59 No comments:

What? June is gone? We are halfway through the year?

I had visions of painting more Krieg infantry but instead I painted up a series of psykers- a Primaris Psyker and 3 Wyrdvanes with their handler.

The Psykers all got simple greenstuff masks, which just helps them feel more Krieg-y.

As for the handler, I have actually had this idea built since like... January. After the desolation of the Krieg civil war, it fit for me that they would be extra hateful and skeptical of anything that could fall under the sway of the dark gods, so Psykers would have “minders”. In game terms, he is a fourth Wyrdvane. 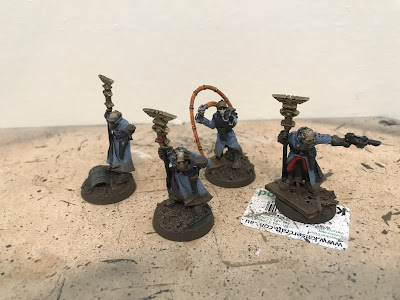 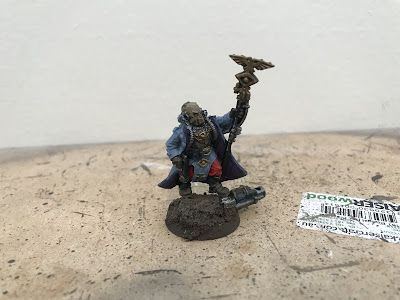 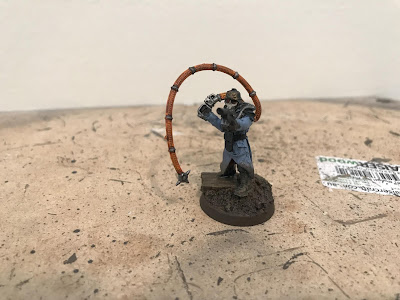 2. Create a table of terrain to support a new game
Did this in March!

3. Make a modular terrain piece
I haven’t given this any thought, probably should?

4. Paint a Naval Fleet
Done! Did it in March

5. Finish something for an army I haven’t used in a year and take it to a tournament
On track to have this done for next month!

6. Buy a starter box and paint all of it
Did this one back in February

7. Paint every miniature for a game I own
Did this one too!

8. Paint a Space Marine Hero each month
On track here too, with another one painted. This one has the squad’s special weapon, a Plasmagun!

So that is six Space Marines, for six months so far.... 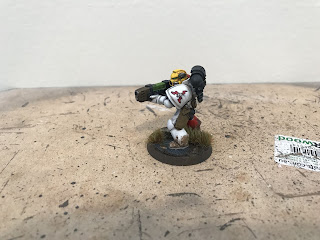 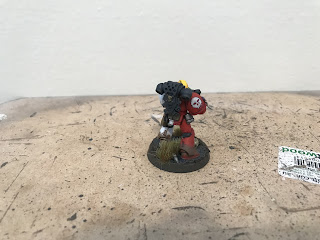 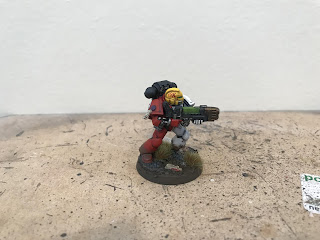 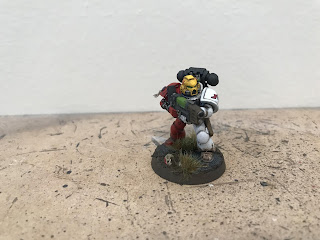 9. Paint a stand-alone force
Did this one last month!

10. Update and improve a table of terrain
Working on this one at the moment, will be done for next month!

11. Paint something napoleonic
No further progress on this one, it’s firmly on the back burner. I mean, technically I have done it with the unit I have painted, but I feel like that doesn’t count...

12. Finish what I should have last year
Only one of these left, and I haven’t touched it since last year. Maybe next month?

So that means half way through the year, I have finished 5, with 2 in progress for July, 2 which are on track for the year and the rest I haven’t done much with. All in all, not bad!

But now it is time for  Mortywatch!

I have completed the build, and the painting of the first sub assembly. And I am loving it!