I've just received a package in the mail from Ollie at Battlekiwi (www.battlekiwi.com) today (at work, of course - who wants to have to explain all the packages turning up at home to the missus! Love you dear)

I needed to get some things for my Bolt Action forces so I approached Ollie to see if he could make them for me. I wanted to get a couple of customised objective markers with one set for my 51st Highland force and another for my new Grossdeutchland force. Ollie was well up for the task.

After sending up a couple of images that I wanted to use, Ollie cut the 40mm round acrylic with the designs. 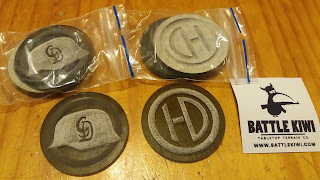 They are exactly what I wanted!

While I was making my German force for BA, I had the issue of not having enough models to show the rifle/panzerfaust armed troops from Warlord Games' Grenadier box. A search around the internet did not come up with any figures that I liked and I also disliked the idea of the models having to solely be armed in the WYSIWYG format. So, I asked Ollie if he could make panzerfaust markers that iIcould use next to each figure that had one and remove once it has been fired. Fortunately Ollie had been experimenting with this very idea and you'll see on his site the option for the markers! All in all, great product, response and service from Battle Kiwi. Check out his site for more products especially his wizbang Infinity terrain.

Now all I need him to do is design both a Haqqislam themed set and a set of ruined space colony buildings, a'la Aliens...