So before I begin, I was debating whether to kind of just abandon what I know about AC130s and painting this in the three colour camo scheme it would have worn in Vietnam. The idea of painting something so big entirely black or very dark green, especially when I'm painting my TY force in MASSTER camo (I know, but it looks SO COOL) did not please me.

But once I'd put the green on, I was umming and ahhing. And then Pooch came to my rescue with a delighful image of an AC-130 with a black underbelly and underwing and a two colour camo on the top. I started with a Brown Violet base with a liberal dose of GW's Nuln Oil over the top to make sure I didn't lose any of the wing panel lines. My dodgy greenstuff work is vexingly apparent. Don't look under the wings!

I settled on two of my favourite paints - US Dark Green and US Tan Earth to do the two colour blobs. The instruction manual for this kit earns some brownie points at this stage for providing a number of different schemes for ways you could have painted the original Azrael in Vietnam.

I followed some of the camo guide from the instructions to put this on as I do tend to find I repeat myself with painting camo if I'm not thinking carefully. Many of my LW StuGs have very similar stripes...

So the camo is as a base coat of US Tan Earth and then a liberal coating of Devlan Magic before letting that mostly dry and carefully removing any pools before they settled into pigment rings.

Then comes the painstaking process of gently drybrushing the camo stripes on without painting in the many, many, many, many panel lines across the wing surfaces.

Finally, decals to finish the plane. The decal set for this kit is really nice and it has an excellent guide of what to put where. It's even cleverly designed that you could put decals on to cover where the weapon mounts would be if you didn't want to mount the weapons. I admit, it's not clear as to why you'd want to, but....
Here's the final assemblage: 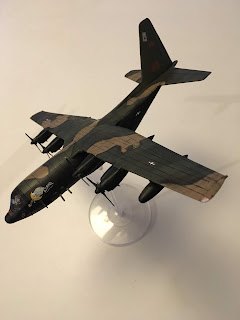 Getting the wingtip lights on nearly broke me especially trying to do it without getting any glue on the surface of the clear plastic. I failed utterly. But you still get a sense of the red and green wingtips in the right light.

I had to be a bit creative getting the hole for the stand bored in the bottom since drilling a 5/32” hole across a vertically split hull is.....impossible. It’s not the prettiest and requires some seam puttying to make the join a bit more robust around the pin but it’s also hidden underneath so meh.

I am going to have to build a stronger base though, the upright on this one was already flexing under the weight. A proper Perspex rod and base will make for a more stable mounting but this will work in the short term.

Looking forward to getting her on the table.


Also, a sneak peak of the test M60's MASSTER camo: 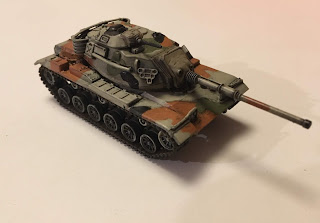 I love the way this looks and I can't wait to get a whole army done. It's been a slow progression using Vallejo Model Air (since it comes in the right colours) with a brush but it gives a really nice finish. I'm now pondering what colour to paint the infantry. Sadly MASSTER was never applied to infantry camouflage.

Posted by McZermof at 14:50 No comments:

So when I left you last time, the fuselage was complete and about to be puttied. This time we get from there to a finished AC-130H.

First off, the wings. I hadn’t decided whether to glue on the props or not when I took this. I could just glue on the cones from the prop hub but that might look a bit lame. Gut feeling? The props will go on but it'll be one of the last decisions. Note the missing wing lights. There's actually some clear plastic bits to fill in the forward wing corners but I'll need to paint behind them before attachment to make sure they show up coloured! 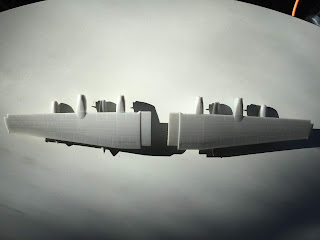 The underbelly of this kit is a PITA. It's not abundantly clear from the instructions but if you want to have the landing gear up, then you're supposed to cut out the middle of the fuselage and insert two replacement bits. I realised this far too late and so have made do fitting the panels that would be used to model the landing gear down to instead model it up. Note all the armaments... 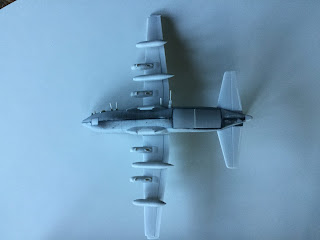 One complete plane. This will get primed and then I'll paint the windshield before it's attached. Getting the wings in was an absolute pig. The starboard wing fitted like a glove. The port wing, not so much. I spend a lot of time with the file getting it to a size that slotted most of the way there. Eventually, it didn't seem to matter how much more I filed, I kept feeling like I was going to snap the fuselage so I gave in! 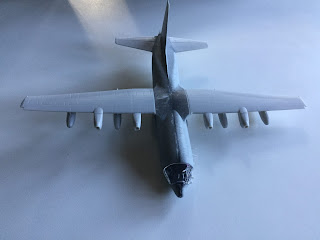 A couple of comments on the kit. It's a nice looking kit, if a little flimsy in places (something that is hardly surprising given the scale) but the instructions leave a lot to be desired. They're clear on how to build the AC-130A but the kit comes with all the parts to get to an H (which is fricking awesome) and I imagine a skilled modeller could get to the J as well by using the wing pylons differently. There's also a snub nose for the Herc which I left off mostly because I couldn't work out where on the fuselage to make the cuts and, well I refer you to my comments above about the landing gear bays...

I do like the fact it comes with a really nice stand that will allow me to use it in a tabletop game and mounted doing the requisite pylon turn. That made me super happy. Speaking of which, here's a size comparison I took of Azrael alongside a Battlefront M60 who will be on table with it. 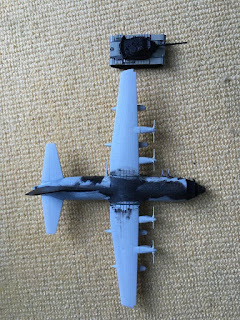 Overall, it was a fun job to assemble and I cannot wait to get it painted and then drop it on the table when I get my Marines done. I hope it will be the centrepiece of Tank's and my combined Marine force for Panzerschreck 2019 as well.