This is definitely a workbench post for the long weekend in which I am bravely attempting to stave off an urge to acquire boats for Victory at Sea and new Necromunda Redemptionists by focussing entirely on finishing all my outstanding Star Wars: Legion models. 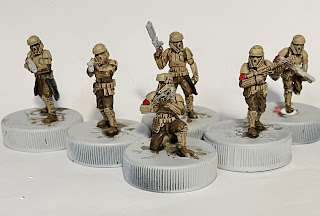 Glad to have had one of these done already as doing the second one is always easier. And now I'll have two squads to go with the two mortars! Bonus! They are nice and easy to paint though so I should be able to knock these out quickly. 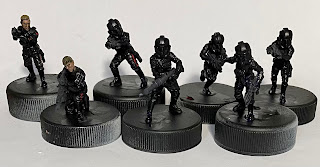 What can I say, black is easy. They're not done yet but honestly, it won't be much work to get them finished. Unfortunately it's also fairly cold here this weekend and the washes aren't drying at a particularly rapid rate so everything is going slow. Del Meeko and Gideon Hask are looking sweet too. 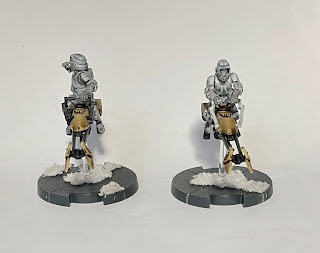 I was a bit iffy about doing these for ages and I've just decided to suck it up and finish the last white-armoured models in the army. I do really like the beach armour of the speeder bikes and it really does make me want to do a sand coloured AT-ST.

I'm still missing one thing I'd like to have, Iden Versio as a leader, but I'm also vaguely tempted to ask my friendly local 3D printing friend to run me off a Seventh Sister, from Star Wars Rebels, to potentially play the role of Iden Versio. I'm also basing up my Rokkrassk from our Star Wars Edge of Empire campaign to play as Bossk in Legion as well. Basically an operative that isn't Darth Vader seems like it could be cool.

It's club day. I don't know what I'll be doing but hopefully getting the Scarif Beach Party out for a couple of games of Legion. I'm *still* waiting on foliage from the US so I can get into painting Elefants.