Oofa. This game hurt, thanks largely to some APPALLING dice (I rolled SO MANY 1s for wound rolls and damage. So many.) and some excellent play by my opponent, recent gaming returnee Matt. He broke out his Primaris Red Scorpions against my Guardsmen, led into battle by the heroic Inquisitor Karamazov.

It was a good game. I got Matt's Outriders, some Intercessors and some Hellblasters and put some hurt on the Dreadnought before I was utterly tabled in turn four! In the end, my Leman Russ spent more time out of the game than his Redemptor and when it did arrive, the new Primaris Eradicators just ventilated my poor tank. Lasguns are also very ineffective against Primaris Marines.

Highlights of the game were Severina Raine killing an Outrider with her 'it's not even a power sword' and Matt's Eradicators doing twice the damage they needed to to blow the Throne of Judgement into next week.

This also happened yesterday. Bloggers Pel and Tank played their first game of Victory at Sea. 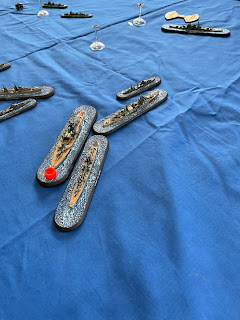 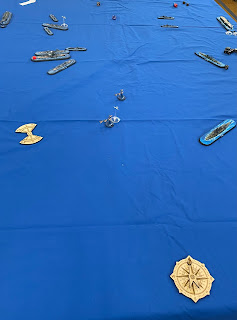 I was reluctant to get into this. I am not really feeling that reluctant now. It looks stonking (the ships are lovely) and the feel of the game is good. Torpedoes are devastating and when the IJN Kongo decides to sink HMS Eagle while under extreme range plunging fire from HMS Warspite, everything seems to fall the way it should so that's definitely promising.

While the two mortars didn't manage to get on the table yesterday, they are done and looking particularly stylish.

Doing the mortars has definitely validated the idea I had to paint my Speeder Banks in sand, not in white. I've also finished assembling Inferno Squad too. The multipart plastic kits in the Legion range are quite nice and not wobbly and bendy like the soft plastic stuff.

I know Inferno Squad was assembled *after* the Battle of Scarif to combat that sort of Rebel shenanigans but I'll definitely enjoy playing the "what-if" scenario with these guys. I also really like that I can add Del Meeko or Gideon Hask to less capable units of Storm Troopers if I want to.

I'm thinking it's time to crack on and finish the Legion. Inferno Squad should be easy as painting black is simple so I'll do that and get into the second squad of Shore Troopers as well. Then it'll just be a couple of speeder bikes (oh god, the white again!) and some slightly more complex basing for them perhaps. Otherwise, I'm still waiting on foliage from the USA so will be delaying more work on 653 until then.