A Game I've Been Waiting For: Stargrave

Today we discover the first adventures of Rogue Trader Devona Caligari, her First Mate Mortem Castranova and their trusty crew, including Hieronymus, who is a very good doggo. Given this was a bit of a spur of the moment thing, I downloaded the free Dead or Alive supplement for solo-play Bounty Hunting and set to work.

Devona Caligari had tracked her Mark, Dogorin the Soulshark, to a starport on the outskirts of some deserted place. His gang was here with him - a bunch of raw recruits mostly but some powerful allies including Bull and his heavy machinegun and the Eltee and his military issue combat armour.

Caligari was just as well served, with her hacker, medic, and picker, along with Castranova and his marines and their very good doggo.

So the game details (and I really like this!) - I picked the scenario because I'd already set out the table so we were in the Starport. On the complications table, I had to bring back physical evidence of the bounty (so the body of the Mark would need to be a loot) and then I rolled up the random selection of dudes that would be supporting the Mark. Each scenario places some 'Notable Features' and they help with directing the movement of the enemies and with deployment.

Here's where we started: 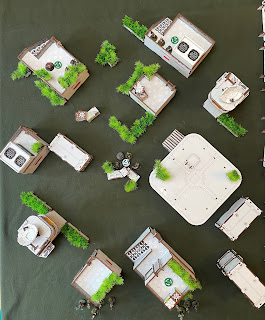 There were three enemies in the middle of the board, a Gunner, a Trooper and a Recruit: 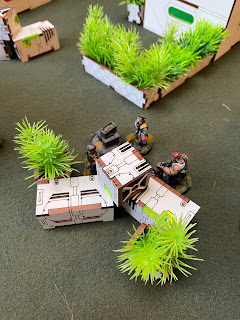 At the rear right, a Pathfinder and two Recruits: 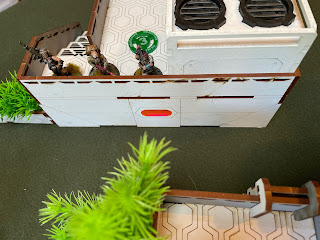 At the rear left, an Armoured Trooper and a Recruit with the Mark: 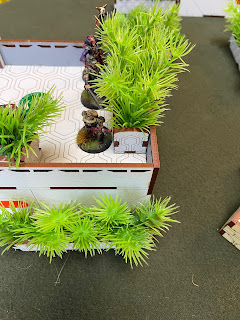 Turns one and two were pretty uneventful - the game order changes slightly when playing solo so I was a little skittish. Devona moved three crew forwards before the entire enemy gang came on. My gunner did some damage to the enemy gunner who in turn stunned one of my Troopers. The Pathfinder and his recruits moved up and then the rest of my crew went, the only note was the medic returning the stunned trooper to functional. At the end of turn two we'd shot down the Trooper in the centre who'd had to move to get line of sight: 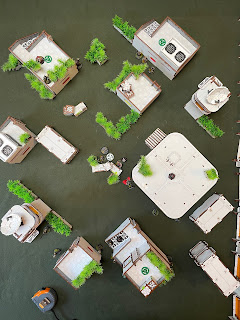 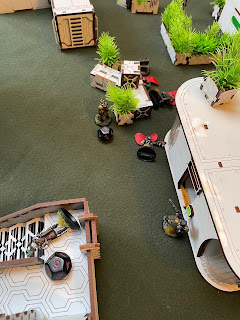 My Gunner took down the enemy Gunner and one of my troopers took out the Recruit in the centre. Hieronymus and the Chiseler moved up my right and the Hacker attacked the left. Mortem the First Mate made a bunch of shots with his marines and did a whole lot of nothing. 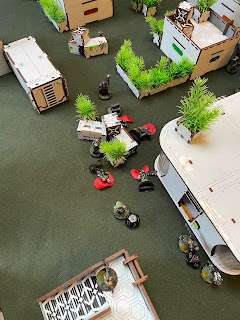 By the end of turn four this was the state of play. You can't quite see the Hacker on left-hand table edge in an entirely unfair fight with the Armoured Trooper and the Chiseler is hiding behind the bushes on the right. 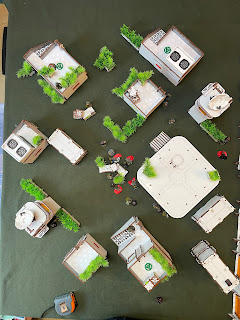 Hieronymus had been killed out on my right by the incoming Recruits and the mess that was the middle of the board had really begun to pile up. Dogorin the Soulshark had arrived and used Psionic Fire which killed a trooper and further wounded Devona and my last action was to smash a powerful 11 points of damage into the Mark. 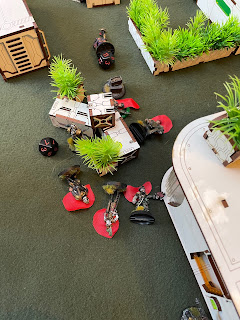 Turn 5 was really just as violent. Most of the crews scrapping over the middle of the board had been killed. The unpainted Tyranid Gargoyle was the first Unwanted Attention I'd rolled and the flappy bird had arrived from the ceiling at the end of Turn 4. It survived shooting, charged one of my Troopers and was promptly killed. 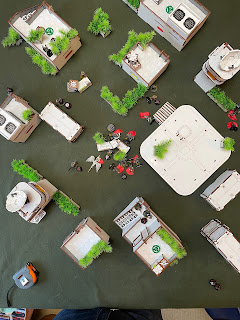 You can see in this photo above that the Soulshark, having been reduced to near death, was trying to flee the battlefield at the end of the turn. 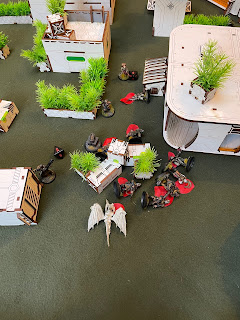 In the end, as the Armoured Trooper gunned down my poor Hacker, Dogorin the Soulshark fled towards freedom. Ignoring the pleas of the wounded Trader Caligari, First Mate Castranova attempted one last time to gun down the Mark but the Soulshark's magic won the day and he evaded the shot before fleeing off the board! 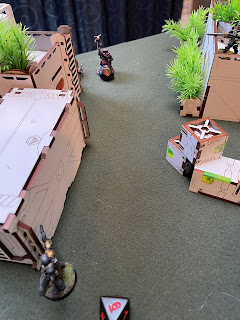 Oof. Violent. The crew I DM for will tell you DnD is my game, a game in which I have spent more time as the DM cheating 20s down than I have cheating other things up for a crit. Stargrave is more of the same - rolling 20s to hit with shooting attacks leading to +5 additional damage were fatal repeatedly. Those were my only one-shots though, which was nice.

I didn't really pay attention to the author's advice to pick my powers carefully for solo games so I don't think I got to do as much as I wanted. Devona managed to fail to cast Void Blade in every turn (and by enough to not want to exert to cast it) and Mortem cast Power Spike on three turns and missed every time with the +3 damage shot.

Overall, I really liked Stargrave. It's got the same simple, underlying mechanics as Frostgrave, but the powers are much less overwhelming and the soldiers do a lot more of the heavy lifting, which I definitely appreciated. I like the fact that the Captain and the First Mate can be completely different (which has lead me to start thinking about new Stargrave crews already) and there is a good variety of soldiers to fit almost any collection. I can't talk to the scenarios too much yet but they look like a very interesting set of encounters. I really love the Unwanted Attention rules and I love the idea that the longer the game goes on, the more likely the attention is and the more likely it is to be slightly terrifying.

Also, really impressed to get the free solo supplement this close to the rules coming out and how well it works. You sort of go in expecting you can out-think a table but actually, other than being able to throw my dog and Chiseler away and have the game be forced to go after them, it worked really well. The slightly different turn structure where the entire enemy gang goes in one hit definitely means you have to take a more prudent approach and stupid plays get punished.

I have finished the first incarnation of 653 Schwere Panzerjager Abteilung for an event in a couple of weeks to they'll wait till next time, as will the meaningful science of stripping paint that I promised last week. I'll try and get my first unit of Shore Troopers done this week as a bonus.