It is! It's Elefants in Italy again!

I'll be playing in an event in a week that's themed around the campaign in Italy. I ran this army many many moons ago for a weekend event set in the winter on the Eastern Front in V2 or V3 and it did not go well for me. So I'm trying again with a slightly different list. The event organiser has replicated a whole wack of the old V3 lists so this is definitely not V4 legal. That version of the list will be going to Panzerschreck in July because MOAR ELEFANTS!

The core is all heavy and was built this way for two reasons. One, the organiser is permitting two 1-tank platoons. Two, I was spending the points on StuGs before I decided that it was go heavy or go home and adding the Tigers also shores up the army morale so I'm not unhappy about that. I'll be using the classic Mid-war Monsters Tiger 1P as a proxy Elefant. After this event, it'll drop in with the other two normal Tigers just in case I ever want to run 3.... 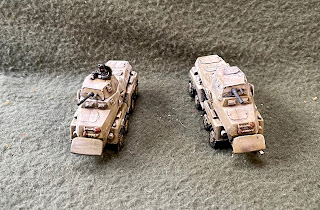 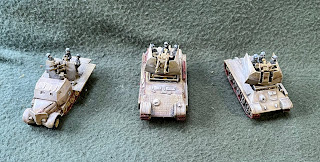 The support is a motley collection of my previous 653 and some newer bits and bobs. The AA came from the original 653 V3 list where a Panther- and T34-hulled quad AA were permitted by the list. The Nebs I did late last year and the Grenadier platoon is the first of the three I need to do for my Winter Infantry army. The greatcoated Schrecks and Fausts are from Peter Pig and complement the BF infantry nicely. The 8-rads were taken from my Early War Panzerkompanie as I'm unlikely to use 4 in any Early War game at this point in time and they are usually options for recce in LW so they'll drop nicely into my Grenadiers when I get the rest of this army painted. Which leads us nicely to....

Sometime last year I was confronted with some particularly obstructive primer that I was failing to remove with the classic Simple Green. One of the locals here recommended an antiseptic called Dettol as an insanely powerful paint stripper that'll beat things Simple Green can't move.

He was right. Dettol will take the paint off almost anything. Unfortunately using it as a paint stripper also turns some acrylic primers hanging into a sticky slime that's a right pain to move. Especially off your fingers. BUT! I have discovered the answer. There is a really useful degreaser made from orange oils that works like a dream. Throw something that's been Dettol-ed into that for a couple of days, the stickiness goes right away and the antiseptic smell is replaced by an intense orange. It's not bad.

So I'll stick with Simple Green most of the time but Dettol will definitely work for those really truculent jobs.

The results of Hannibal's most recent ride through Italy. Will it go well? Almost certainly not. After that, it'll be back to the workbench methinks!