So I know I said last week that I'd finish the last base of the Ghosties, but I gotta be honest, with some sweet sweet Stormtroopers sitting on my queue tray next to my painting desk, doing them was a bit of a grind. On the plus side, I did make some progress on the last KoW base but I got completely distracted by other things.

Vader and Krennic have a day at the beach

The great Sith Lord himself, Darth Vader, is the first member of the Scarif Beach Party. Painting all black models is not something I have a great deal of difficulty with these days so I tore through this model. The top of the chest with the grey stripes frustrated me for a while as I couldn't quite see where the raised bits were but I'm happy with where they came out.

The only thing I still need to do is a spray varnish followed by a paint on gloss varnish of his eyes as they should be super shiny. I'll probably gloss the sabre too just to give it a shine.

Vader's was the first base I made and I'm really happy with how it came out. A pumice gel beach gets painted first, then the bright blue sea and (hat tip to Pelarel on this one) solid gel gloss sculpted over top. Once that sets dry (about 12 - 16 hours in the hot water cupboard) the white highlights get painted over the tops of the sculpted wave crests. It's quite neat.

My second member of the Scarif Beach Party is Director Orson Krennic. This was my first real use of contrast paint and I am SUPER happy with how it looks. Getting the highlights right was a real challenge but Vallejo Cold White goes really well as it is VERY white. I have left the underside of the cloak unhighlighted and so it may be a touch grey. I can't decide yet.

I like Krennic's pose and the face is so evocative of his walk across the beach at the beginning of Rogue One. This was the second base I did and the water looks a lot choppier than Vader's. I glued Krennic to his base before I finished him off as constant handling was ruining the paint work and getting the back of the water under his cape made me swear a lot. But it works.

Finally, I did a neat R4 droid. I decided to use the colour palette from a Star Wars: Rebels (I think) episode in which Sabine repaints Chopper to look like a Courier Droid.

This was the first real test of contrast paint and it works REALLY well on the flat panels. I am well pleased. He'll get added to one of my Stormtrooper Squads , for the eventual addition of a Scarif coloured AT-ST. Because why would I not?

So I am a long way behind the rest of the nerds, who have all painted most of their figures so far. I'll catch up eventually, but these bases are a slow process. I am really looking forward to trying to make a complete water base for a speeder bike with all the spray you'd expect to see. That's going to be a real modelling challenge methinks.

I did make a bit of an effort to get this base done. I did. I got all the horsemen to the same stage of the painting process. 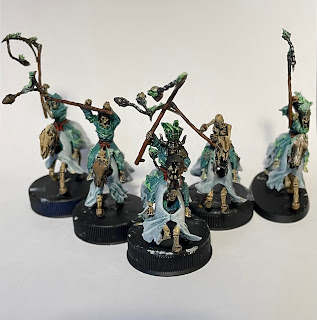 I'm happier with how they're coming along and happier overall that they'll fit in with the whole army now. I still have a lot of work to do on them but nearly there. One more week...

It's a long weekend in NZ next weekend so Pooch, Scotty and I are trying to work in a game of Titanicus and I will be finishing off that base of Hexwraiths. I will. And then I can start on basing the KoW army as well, especially as I've had a bit of a muck around with some solid gel gloss and I think it'll make a really really cool swampy base. I will need some new basing material too, so time for a think about that.